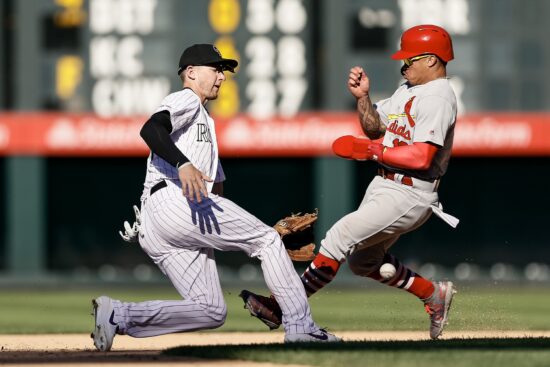 Offseason trade partners meet up for the weekend as the Colorado Rockies visit the St. Louis Cardinals. It will be Nolan Arenado’s first meeting with his former teammates, but the third baseman has to like the swap so far as his Cardinals sit atop the NL Central while Colorado is mired in last in the West. St. Louis is a huge -205 favorite for Friday night’s tilt.

Colorado would cash out at +185 with a win, but that may be hard to come by as the Rockies are just 2-11 away from Coors Field this season. Bud Black’s team does come in with a bit of momentum though, taking the last two in their series with the Giants. Those were at home though, and Colorado’s two road wins are the fewest in the league.

The Rockies scoring 18 runs in their three game series with San Francisco may be inflated from playing in Denver as well. Colorado has used playing in a hitter-friendly park to post MLBs #6 ranked scoring offense. Even so, Trevor Story, C.J. Cron, and Raimel Tapia, are all hitting better than .400 over the past week.

Colorado sends Austin Gomber (2-3, 5.90 ERA) to the mound to face his old team on Friday. The left-hander came over from St. Louis in the Arenado trade and has pitched well in his two starts at Coors Field this season (1-1, 3.00 ERA). It’s ironically on the road where Gomber has struggled, going 1-2 with a 7.20 ERA. At least he’s familiar with pitching at Busch Stadium.

Arenado made no secrets about his displeasure with the Colorado organization over the past couple seasons. The perennial all-star has done OK with St. Louis so far, hitting .276 with 5HR and a team leading 22 RBI. Arenado is hitting .385 (10-26) with 5XB hits over the past week.

St. Louis as a team has lost their last two in a series with the Mets, which followed up a six game win streak. Their offense has sputtered with just 3 runs in the last two games, a trend which may continue as Arenado is the only Cardinals player who has ever faced Gomber. Then again, pitching coach Mike Maddux should know a good game plan to attack his former hurler.

The Cardinals counter this pitching matchup with Jack Flaherty (5-0, 3.41 ERA). Flaherty gave up 3 ER in his last start, which is a lot for him as he had allowed four total in four starts prior. The good news is that St. Louis scores for Flaherty too, putting up 61 runs in his six starts this season.

St. Louis has dropped two in a row and their offense is sputtering. Colorado is just so bad on the road though that they are very tough to consider in this spot. Ultimately Flaherty will rattle the Rockies bats, and St. Louis will get just enough against their old teammate.