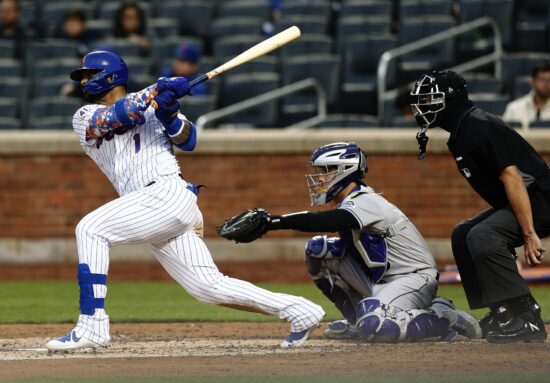 The New York Mets have gone 4-6 over their last 10 games as their lead in the National League East has dwindled to one game. The good news is they welcomed back ace Jacob deGrom on Tuesday, and he struck out nine over five innings in a no-decision. The Mets scored twice in the sixth to win the game 3-1 over Colorado and even the series.

The Rockies’ 3-2 win on Monday in New York was just their third win outside of Denver this season. They are 3-18 on the road and also struggle against right-handed pitchers with an 11-25 record. However, they are in a position to win this series, which would be thief first road series win since September 4-6.

The Colorado Rockies have their ace German Marquez (3-4, 4.82) on the mound coming off his best start of the season. Last Friday, he fired seven shutout innings in a 7-1 win over Arizona with eight strikeouts and four hits allowed. Marquez has won two starts in a row and posted a 2.26 ERA since allowing eight runs to the Giants on May 4.

Marquez beat the Mets on April 17 in game two of a doubleheader at Coors Field. In that outing, he allowed just two runs on two hits while striking out six in a complete-game win.

The Rockies’ offense ranks fourth in the National League with a .249 batting average, but they are uncharacteristically 10th in home runs with 49 in 49 games. Ryan McMahon hit his 13th homer of the season Tuesday off deGrom, and C.J. Cron leads the team with a .282 batting average.

Injuries have played a big role in the Mets’ offensive struggles. As they finish this series, they are without first baseman Pete Alonso, infielder Jeff McNeil and outfielders Michael Conforto, Brandon Nimmo, J.D. Davis and Kevin Pillar. Those five players have combined for 16 home runs and 63 RBI on the season.

Righty Marcus Stroman (3-4, 2.75) gets the ball Wednesday, hoping to end a personal four-game losing streak. His last win came in Colorado on April 18, with one run allowed over eight innings. Last time out, he took a no-decision with eight strikeouts over six innings while giving up two runs at Miami on Friday.

None of the current Rockies have homered off Stroman, and only Trevor Story (3-for-9) has more than two hits against him. He has allowed five home runs total in his four May starts.

Who will win tonight’s MLB game

Both starting pitchers have pitched well recently, and the offenses have struggled mightily, Ryan McMahon has homers in both games in New York, but no other Rockies hitters have helped him. The Mets got the big hit Tuesday night and have the better bullpen to win a close game.