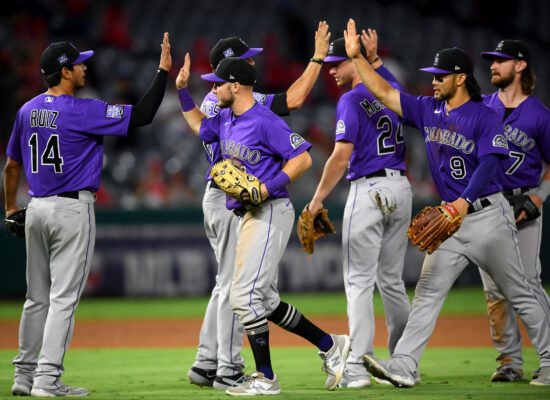 Things haven’t gone as expected this season in San Diego, and that happened again this week surrounding the trade deadline. At one point, as the trade deadline was inching closer, Padres GM AJ Preller thought he was going to have a deal to acquire at least one of Texas Rangers outfielder and Nationals starting pitcher Max Scherzer.

Unfortunately for Preller and Padres fans, the Yankees swooped in and made a deal for Gallo, and the Dodgers made the deadline’s biggest blockbuster for Scherzer and infielder Trea Turner, who projects to play shortstop or second base.

Still, the Padres find themselves with a 60-47 record and losers of back-to-back games, but they still own a 3.5 game lead in the National League Wild Card chase.

The Colorado Rockies decided not to part ways with star shortstop Trevor Story at Friday’s trade deadline, which is a decision made more about receiving a compensatory draft pick when Story signs with another team this season than it was about the Rockies thinking they can compete for a playoff berth. Entering Sunday’s game, the Rockies are 19.5 games out of the division race and 13.0 games back in the Wild Card.

The Padres were forced to put their electric young shortstop Frenando Tatis Jr. on the 10-day injured list on Saturday with shoulder inflammation, an injury that has resurfaced from earlier this season. The Padres also placed starting pitcher Chris Paddock on the injured list this week.

Taking the mound for the Rockies is lefty Austin Gomber, who has acquired this offseason in the Nolan Arenado trade with the Cardinals. Comber has started 17 games for the Rockies this season and has effectively navigated the Coors Field pitching terrain to the tune of an 8-5 record with a 3.69 ERA in 90.1 innings pitched.

Gomber has given up a career-high 13 home runs this season but also has already pitched more innings than any other season in his career. He’s been effective at limiting his walks, and that has gone a long way towards his success this season.

In his last two starts, Gomber has gone 6.0 innings each outing and has given up a combined five earned runs and eight eights. Gomber earned the win in each of those two starts against American League West opponents.

For the Padres, it is going to be 24-year-old rookie right-hander Reiss Knehr. Knehr is making just his second career start. His first start came against the Rockies on July 9, and he went just 3.2 innings and gave up two earned runs on three hits.

Knehr is the ninth-ranked prospect in the Padres farm system, and that is largely because of how effective his fastball is. His fastball stills above 94 mph on a consistent basis, and he pairs his fastball with a changeup that averages about 88-89 mph.

With Knehr on the mound for the Padres, the Rockies appear that they could be well-positioned to take all three games in San Diego this weekend. Still, the smart money should expect the Padres to take at least one of the three games this weekend, so place your bets on the Padres money line on Sunday.