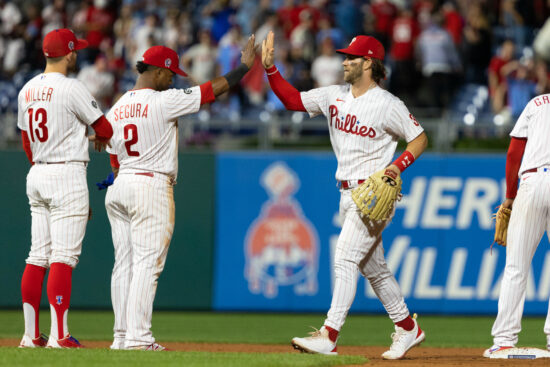 The Philadelphia Phillies finally got right on Saturday night, snapping a 4-game skid to beat the visiting Colorado Rockies 6-1. Nobody should be giving up home wins to a Colorado team that is 20-51 away from Coors Field on the year, especially a Phillies squad that is within 3 games of the 2nd wild card spot. That makes Colorado taking the first two games of this series 4-3, and 11-2, unacceptable for Phils’ fans.

Rockies on a Big Road Trip

Colorado is the 2nd worst road team in baseball, and they’re going to be a team to fade over the next little stretch. The Rockies wrap up their series with 2nd place Philadelphia on Sunday, then head to 1st place Atlanta and have another tough East Coast matchup at the Nationals.

The Rockies are going to wear thin sooner rather than later, and that may be starting to show already in Saturday’s 6-1 loss in which Philly starter Zach Wheeler pitched into the 7th allowing just a single run. Colorado did have 21 hits total in the first two games of this series though, getting 2 HRs after being down to their last strike on Thursday and scoring 7 runs after the 7th inning on Friday.

Bud Black could’ve hoped for a little better start from Kyle Freeland on Saturday, as the lefty was touched up for 4 ER over 6 innings which includes walking four Phillies batters. Black is going back to Ryan Feltner on Sunday as the rookie makes his 2nd career MLB appearance. Feltner allowed 6 ER over just 2.2 IP to post his ERA at 20.25 after his first start.

Philadelphia is a huge -261 favorite on Sunday but that’s a big chunk of change to lay on a team that had dropped 6 of their previous 8 games prior to the win on Saturday night. The Phillies should have an incentive – down 3.5 in the division and 3 back from the wild card – but haven’t played with a ton of sense of urgency lately.

Sure Feltner was bad in his lone MLB start so far for Colorado, and the Phillies would seem to have a huge pitching advantage on paper with Aaron Nola (7-8, 4.7 ERA) due up in the rotation. Nola has posted the 2nd worst ERA of his career in 2021 however and has allowed 9 ERA total in his last two starts.

The good news for the Phillies is that they got their offense going on Saturday in the 6-1 win. Brad Miller, Jean Segura, and Bryce Harper all had HRs, and it was a nice output after being held to 3 runs or less in the four games prior. Harper continues to play at an MVP caliber level, posting a .536 OBP over the past week.