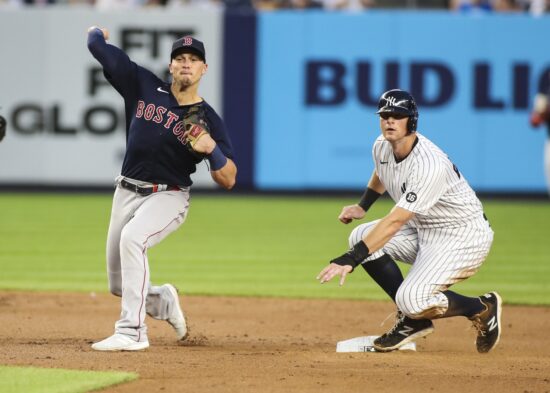 Major League Baseball’s most storied rivalry renews this weekend as the New York Yankees visit Fenway Park and the Boston Red Sox. The Yankees have won four games in a row and have pulled to within seven games of the Red Sox.

The New York Yankees come into play with a record of 50-44, good for third place in the American League East, seven games behind the Boston Red Sox. The Yankees trail the Oakland Athletics by 3.5 games in the wild card standings. New York has been playing much better baseball of late, having won four in a row, including two of three from Boston last weekend. The Yankees will send lefthander Jordan Montgomery to the mound Thursday. Montgomery is 3-5 on the season with an ERA of 4.18. He has struck out 99 hitters and walked 30 in 99 innings. He last faced Boston six days ago and took the loss, allowing three runs over six innings. New York’s leading hitter is right fielder Aaron Judge, who is hitting .282 with 21 home runs and 47 RBI.

The Boston Red Sox come into play with a record of 58-38. They lead the American League East by a game over the Tampa Bay Rays. After losing two of three to the Yankees last weekend, Boston responded by beating Toronto twice in a row. On Thursday, they will send right-hander Tanner Houck to the mound. Houck has a record of 0-2 with a 3.38 ERA. He faced the Yankees last Friday and threw three scoreless innings, and picked up the save. In 13.1 innings this season, he has struck out 15 and walked just two. Boston’s leading hitter is shortstop Xander Bogaerts, who is hitting .313. Third baseman Rafael Devers leads the team with 24 home runs and 74 RBI.

The Red Sox continue to be one of baseball’s bright spots. After finishing in last place in the AL East a year ago, they have gotten the pitching they needed to compete. The Red Sox have not been kind to the Bronx Bombers, going 7-2 against them thus far this season. New York is playing better baseball, though, so expect a competitive weekend between the two teams. Boston does have a better lineup top to bottom, so they should win this matchup. Keep an eye on Houck, as he has only pitched 13 innings at the major league level this season, and he has made just five career starts. Boston’s bats will make up for it, though, and will take care of their young pitcher.