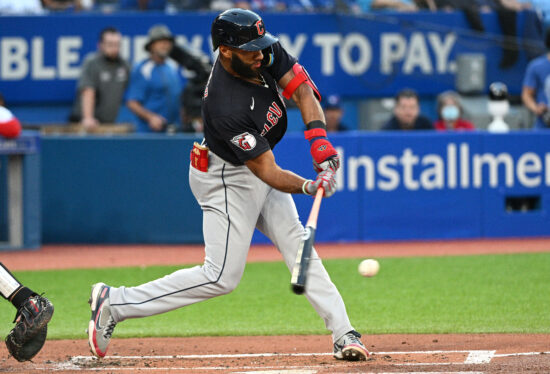 Cleveland claimed the first place spot in the AL Central division, thanks to a 6-game winning streak.

Toronto is 2-6 in their last 8 games. They hold a 1.5 game cushion in a very competitive AL Wild Card race.

The first of our MLB prop bets involves Jose Ramirez.

In Friday’s dominant 8-0 win over the Blue Jays, third baseman Jose Ramirez went 3 for 3 with a walk, reaching base safely in all four appearances. He also crushed a 3-run home run, his 22nd of the season. Ramirez is hitting .292 with a .938 OPS on the season against right-handed pitchers. He’ll face righty Mitch White on Saturday. In the last 3 weeks, Ramirez has gone 22 for 76 (.289) at the plate. I like his hot-hitting to continue with another multi-hit game on Saturday. 3 of the last 4 times he had a multi-hit game, he followed it up with another multi-hit game on the following day.

The Guardians will have right-handed starter Triston McKenzie (8-8, 3.16 ERA) taking the mound on Saturday. McKenzie’s season overall has been good but not exceptional, but his recent play has been fantastic, offering an opportunity to capitalize on the under. Across 6 starts in July and August, McKenzie allowed 9 earned runs in 47.2 innings pitched, equivalent to a 1.70 ERA.

Most recently, McKenzie pitched an absolute gem against the hard-hitting Houston Astros, holding them to just 2 hits through 8 shoutout innings. I expect another strong start from McKenzie on Saturday.

Vladimir Guerrero Jr. provided one of the Blue Jays’ only 3 hits in Friday’s shutout loss. Guerrero now has an 18-game hitting streak dating back to July 15th. He has at least one hit in 29 of the 33 games he played in July and August, hitting .336 during that month and a half span.

Despite the Guardians’ improved pitching as of late, especially from Saturday’s starter Triston McKenzie, Guerrero Jr. has proven his bat is one that cannot be stopped. I’m comfortable betting on his hitting streak to improve to 19 games on Saturday.

Mitch White has had an up and down season for the Blue Jays, getting hit hard in some starts and shutting out the opponent in others. The biggest risk to an over bet on Mitch White is his tendency to get pulled early.

As a converter reliever, he’s only completed six innings in 1 of his 9 starts so far this season. On the other hand, with how red-hot the Guardians’ offense has been, I feel confident in their ability to quickly rack up 3 or more runs. White gave up 3 runs in 4.2 innings pitched against the Twins in his last outing.

Matching the strong hitting season of Jose Ramirez is fellow infielder Andres Gimenez. On Friday, Gimenez had a modest 1 for 4 game. His bat has been on fire as of late. In the first two weeks of August, Gimenez is hitting .368 at the plate, leading the Guardians offense with 9 hits during their current 6-game winning streak. Gimenez is .313 on the season with an .881 OPS against right-handed pitchers, so he should equally benefit from the matchup against RHP Mitch White. I expect Gimenez to get his 10th and 11th hits of the week on Saturday.