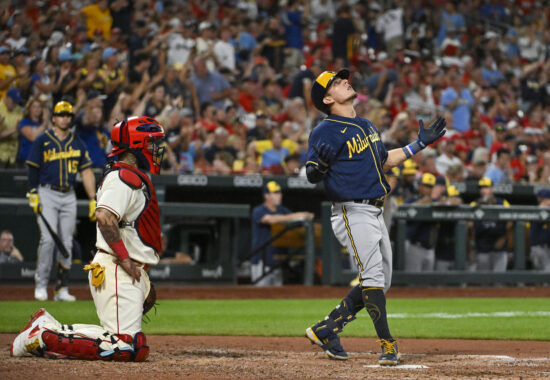 The Brewers improved to 61-51 on the season, now back to within a half a game of the division lead. The Cardinals dropped to 62-51, still leading the NL Central.

The first MLB prop bet features Cardinals star first baseman Paul Goldschmidt. At 34 years old, Goldschmidt is having a career year, hitting .330 with a 1.028 OPS, both good for 2nd in all of baseball.

Goldschmidt is especially dangerous against left-handed pitching. While facing southpaw opposing pitchers this season, Goldschmidt is hitting an incredible .443, with a 1.367 OPS.

Faced with a left-handed starter in Aaron Ashby (2-10, 4.32 ERA), Goldschmidt is sure to have another hard-hitting game. I’m confident he’ll exit the weekend with a couple more RBIs under his belt.

Speaking of Brewers starting pitcher Aaron Ashby, Sunday’s matchup will feature his second opportunity of the season to face the Cardinals. In their previous matchup on April 17, Ashby gave up 3 runs in 4 innings, although none of the runs were earned.

Ashby has 103 strikeouts in 21 outings this season, averaging about 4.9 strikeouts per game. He only managed to blow by 4 batters in his previous matchup with the Cardinals.

This is a close call, but Ashby managed to strike out 5 or more batters in each of his last 3 outings. The Cardinals’ batting lineup is prone to strikeouts, and I think he’ll make that streak 4 in a row on Sunday.

Brewers outfielder Christian Yelich continued to struggle in Saturday’s win, going 0 for 4 at the plate. Yelich is hitting just .184 in the month of August thus far.

With Yelich’s recent struggles at the plate only serving to exacerbate his inability to hit Mikolas, he’s likely to finish Sunday’s matchup with another 0-for. I’m confident in taking the under here.

Mikolas does have a lot of success against Yelich, but his performances against the Brewers as a whole have been up and down. In 18.2 innings pitched against them, he surrendered 9 earned runs, equivalent to a 4.34 ERA.

In his last start on August 9, Mikolas got absolutely hammered by the Rockies. After pitching just 2.2 innings, he gave up a whopping 10 earned runs on 14 hits.

Mikolas is likely to bounce back to some extent on Sunday, but I still expect him to give up a handful of runs in what should be a high-scoring matchup.