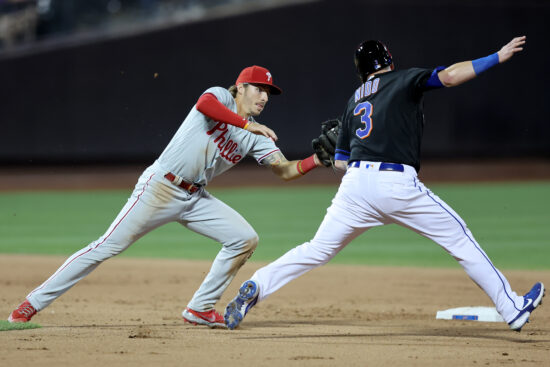 The first of our MLB prop bets includes Jacob DeGrom.

DeGrom returned from the IL for his first start of the season last Tuesday against the Nationals. He gave up just 1 run in 5 innings pitched, striking out 6 batters. On Sunday, he held the Braves to 2 earned runs in 5.2 innings pitched, doubling his strikeout total from his previous start to 12 batters.

DeGrom’s usage will continue to be limited and monitored carefully. It would be surprising to see him pitch much more than 6 innings on Saturday. With that in mind, and a competitive Phillies lineup, I’m inclined to feel more comfortable taking the under here.

Saturday’s matchup between the Mets and Phillies features another premier pitching matchup after a competitive 2-1 game on Friday.

Aaron Nola will take the mound for the Phillies, competing with ace Jacob DeGrom of the Mets. Nola (8-8, 3.17) has had another solid season this year. He faced the Mets twice, back in the first month of the season. In the first outing, he gave up 3 runs in 6 innings pitched.

In the 2nd, he gave up just 1 run in 7 innings. The Mets offense is playing better now than it was back then, but I’d expect Nola to still hold them down well in an effort to keep pace with DeGrom.

Rookie second baseman Bryson Stott had a tough first half of his first MLB season with the Phillies. He entered the All-Star break batting .188 on the year.

It’ll be the ultimate test for the young infielder, and I think he has what it takes to keep his hit streak alive.

Pete Alonso got his 29th home run of the season back on August 4th. The 8-game span without a home run since is his 3rd longest stretch of the season without sending a ball over the fence.

Alonso already has a home run against Aaron Nola this season, back on April 29th. Nola has given up 15 total home runs this year, although only 4 of them have come on the road.

I still think this could be the game where Alonso breaks his drought, but home run props are notoriously unpredictable, so I would approach this bet with some necessary caution.

J.T. Realmuto went 0 for 5 in the Phillies win against the Mets on Friday.

I expect another tough outing for him on Saturday as he’ll get set to face Jacob DeGrom. Realmuto is 4 for 30 (.133) with no walks in his career against DeGrom.

With favorable odds for a low under of 0.5, I like this as a bet that takes advantage of Realmuto’s career struggles against DeGrom. Keep in mind, DeGrom has recently returned from injury, and the Mets bullpen is likely to come into play at some point.

I still feel confident that they’ll lock Realmuto down once more on Saturday.