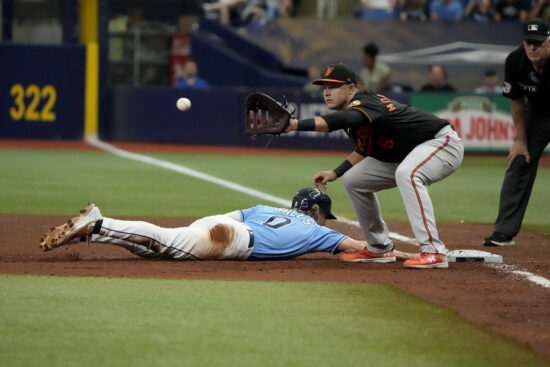 The Rays improved to 59-53 on the season, re-claiming the AL’s last wild card spot. The Orioles dropped to 59-54, falling a half-game out of a playoff spot.

In Saturday’s loss against the Rays, Santander went 1 for 4 at the plate. He’s been hitting really well in the past month. Since the All-Star Break, Santander has a hit in 20 of 22 games.

After going 31 for 88 (.352) in those past 22 games, I’m confident that Santander will keep his hot hitting going. Santander is 3 for 7 at the plate this season against opposing starting pitcher Drew Rasmussen.

Starting pitcher Drew Rasmussen (6-4, 2.96 ERA) takes the mound for the Rays on Sunday. Rasmussen has had a strong season, with a couple of rough outings mixed in.

In two previous matchups against the Orioles this season, Rasmussen pitched for a total of just 8.2 innings, giving up two earned runs in each matchup.

While Rasmussen has kept scoring low, his length has been questionable. In his last 6 starts, he failed to complete 5 full innings 3 times, including a game against the Orioles. I expect another short start on Sunday.

Outfielder Randy Arozarena has been a bright spot in a depleted Rays batting lineup. Since July 16th, he has gone 24 for 79 (.304) at the plate.

Arozarena’s hard-hitting doesn’t come without its drawbacks. In the same span of time, he racked up 19 strikeouts. He continued that pattern in Saturday’s win, going 2 for 3 with a strikeout.

Arozarena is 5 for 13 with 2 strikeouts this season against opposing starting pitcher Jordan Lyles. I think he’s a good bet to once again whiff at least one plate appearance away on Sunday.

Meanwhile, in his 3 starts against Baltimore this season, Lyles pitched a combined 13.1 innings, giving up 11 earned runs, equivalent to a 7.43 ERA. He had his best game against the Rays in their last outing on July 28, pitching 5.2 shutout innings.

The Rays still usually hit him hard, and his tendency to give up a flurry of hits makes me like the over in any category. Lyles has allowed 5 or more hits in 21 of his 23 starts this season.