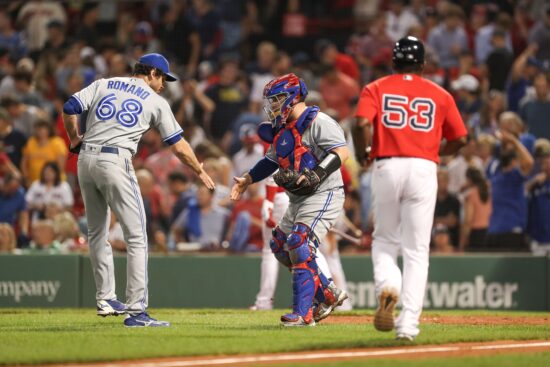 This looks like the beginning of the end for the Boston Red Sox, who have dropped five of their last six and are now 7GB in the wild card race but with four teams to jump. It doesn’t help matters that Boston is on the verge of getting swept by the Toronto Blue Jays, who are 12-3 vs. the Red Sox this season.

Toronto sits in second place in the wild card standings heading into the Blue Jays vs Red Sox matchup. Toronto has won five of their last six – which have all been on the road against AL East rivals the Yankees and Boston. The Blue Jays seem to have a nice pitching edge on Thursday and are -166 favorites on the Vegas odds.

Gausman Dialed in for Toronto

Toronto seems like a strong play in the Blue Jays vs Red Sox series finale due largely in part to having Kevin Gausman (9-9, 2.99 ERA) up in the rotation. Gausman is in the midst of a dominant stretch in which he’s held three of the last four opponents scoreless. There is a 5ER allowed over 4.2 IP outing against Cleveland mixed in there but Gausman still has a 1.75 ERA in four August starts.

Gausman has also had success against Boston this season, going 3-0 with a 1.98 ERA in four outings against the Red Sox. That includes 3 ER allowed over 5.0 IP at Fenway at the end of July, but that’s also a game the Blue Jays won 20-5. Gausman is averaging 9.25 K’s per game in four starts vs. Boston this year.

Toronto’s offense has belted out 23 hits so far this series even if Wednesday’s 3-2 win was a bit lower scoring than the 9-3 victory in Tuesday’s opener. George Springer has had a nice week going 5-10 with 4 RBI while Alejandro Kirk had a 3-hit game on Wednesday.

Red Sox About to Fold

Getting swept by the Blue Jays might be the icing on the cake for Boston in this disappointing season. The Red Sox couldn’t build on a 5-1 run over a six game span earlier in the month going 1-5 since then. Boston was 8-19 in July and is 9-12 so far in August, a far cry from their 20-6 record in June.

Boston has scored just five runs the first two games of the series, a trend that will probably continue up against Gausman in the series finale. The Red Sox haven’t scored much against Gausman this year but they have some nice individual numbers. Tommy Pham is 7-14 for example, J.D. Martinez 6-18 with a HR, and Xander Bogaerts 16-51 but with 11 K’s.

Kutter Crawford (3-5, 5.14 ERA) goes for the Red Sox on Thursday in his second start of the year against Toronto. He gave up 3ER over 6.0 IP against the Blue Jays on July 23rd but it ended up being a 4-1 Boston loss. Crawford has had a rough August posting a 7.40 ERA in four starts.

The Red Sox could salvage one here, but with Gausman being on a dominant stretch and the Red Sox struggling to score runs so far this series this one looks like it goes Toronto’s way big time. Crawford is coming of a 9ER outing in his last start so the Blue Jays bats have to be licking their chops.