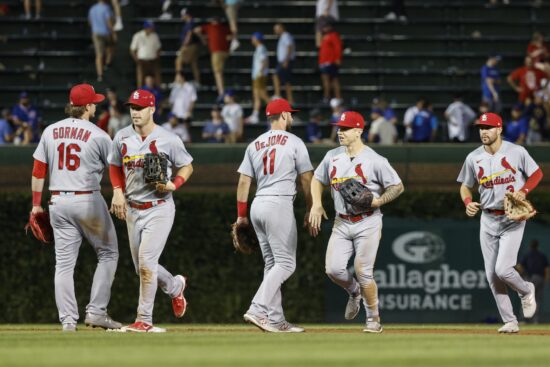 This week’s series at Wrigley Field got off to a good start for the St. Louis Cardinals, who came out on top 1-0 on Monday to push their winning streak to 8 games. That was snapped with a 2-0 loss in the opener of a doubleheader on Tuesday, but the Redbirds got back to their winning ways with a dominant 13-3 win in the nightcap.

The Chicago Cubs had been playing better ball as of late going 12-10 in August but they are hefty underdogs (+180) on Wednesday. St. Louis is -215 on the Vegas odds in what is game four of a five game Cardinals vs Cubs series.

The Cardinals offense wasn’t clicking in the first two games of this series, although they were lucky to get a 1-0 win in Monday’s opener thanks largely in part to Jordan Montgomery pitching a 1-hitter. The Cardinals were then shut out in Tuesday’s doubleheader opener before finally erupting for 16 hits in the 13-3 win in the nightcap.

Nolan Arenado had three hits including a HR on Tuesday night while Tyler O’Neill and Tommy Edman also added long balls. The Cardinals scored 13 runs even though Albert Pujols didn’t get the start, and he’s been red hot with a .526 average and four HRs over the past week.

Miles Mikolas (10-9, 3.32 ERA) is up in the rotation for St. Louis in the Cardinals vs Cubs matchup, trying to make it 10 wins in the last 11 for the Redbirds. Mikolas got the Coors Field treatment on August 9th giving up 10 ER in the hitter-friendly Denver atmosphere, but he’s looked better his last two allowing just 3 ER while completing the 8th inning in wins over Milwaukee and Arizona.

Chicago is yet to have a winning month this season, their best being an 11-14 mark in July. Chicago currently sits at 12-10 so they’re playing better, but the bad news is that they head out on a 9 game road trip after this series with tough visits to Milwaukee, Toronto, and St. Louis.

The Cubs have managed just 13 hits in the three games this series but they have handed Mikolas a 4.15 ERA in three outings against him this season. Willson Contreras has hit .368 against Mikolas in his career while Patrick Wisdom has a HR and 4 RBI in 8 career ABs vs. the Cardinals starter.

The Cubs used a lot of relievers on Tuesday, with Javier Assad going just 4.0 IP in his MLB debut in the first game and Adrian Sampson lasting just 3.1 IP in the nightcap. That’s going to put a lot of pressure on Luke Farrell in his first MLB outing of the season.

This looks like another night where it’s St. Louis by a big margin. You always wonder what an offense has left in the tank after a 16-hit performance like the Cardinals had on Tuesday night, but the Cubs used 7 relievers on Tuesday and have a starter making his 2022 MLB debut.