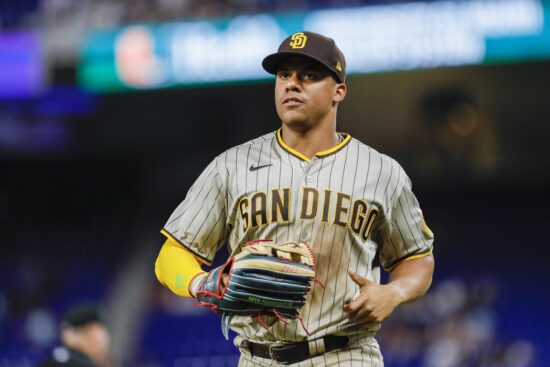 It was a long flight back from Miami, but the San Diego Padres are glad to be back home on Thursday night after a somewhat disappointing 3-3 road trip. The Padres won two of three in Washington last weekend in a series many thought they should sweep and then were luckily able to avoid a sweep with a 10-3 win over the Marlins on Wednesday.

The Washington Nationals are making a long trek West as well, wrapping up a series where they lost two of three to the Cubs. San Diego is a gigantic favorite at -370 on the Vegas odds for this Nationals vs Padres matchup, but is there any way Washington can come through at +285?

Washington is still by far the worst team in baseball, but they didn’t play horribly this week vs. Chicago. The Nat’s had a surprising come from behind win on Monday, and then lost two close contests 7-5 and 3-2. C.J. Abrams – one of the big pieces Washington acquired in the Juan Soto trade – made his Washington debut going just 1-11 vs. the Cubs.

Of course despite playing well, Washington still lost the series against Chicago who is just 49-67 on the season. That’s the sixth straight series loss for the Nationals dating back to when they shockingly took two of three from the Dodgers in Los Angeles July 25th-27th. The Nationals are 16-42 their last 58 games.

Normally when Anibal Sanchez (0-5, 7.20 ERA) takes the mound you can chalk up a loss for Washington. That is until last Saturday when Sanchez pitched 5.0 innings giving up 3 ER as the Nationals pulled off a stunning 4-3 victory…over these Padres.

San Diego bookended their 6-game road trip with 10-run performances in a 10-5 victory at the Nationals and Wednesday’s 10-3 win in Miami. They were held to 3 runs or less in three of the four games in between however.

Either way San Diego comes back home with some momentum after the 10-run performance in the finale in South Beach. Soto went 4-12 in his return to Washington, and now he welcomes his former teammates to his new home in the Nationals vs Padres matchup. Manny Machado hopes to stay hot back at Petco Park after going 12-25 on the road trip. Machado and Trent Grisham both homered off Sanchez in last weekend’s series.

Yu Darvish (10-6, 3.40 ERA) tries to help San Diego to a win as they are now just two games up for the final wild card spot when a postseason berth seemed like a foregone conclusion. The Padres are just 3-4 in Darvish’s last 7 starts and he gave up 4ER over 6.0 IP to the Nationals last Saturday.

-370 is a whole lot to lay on the Padres on Thursday night and even the run line is up there at -180. The best play here is on the total, as San Diego has shown they can score double digit runs themselves over their recent road trip and Darvish hasn’t been that sharp for the Padres either.