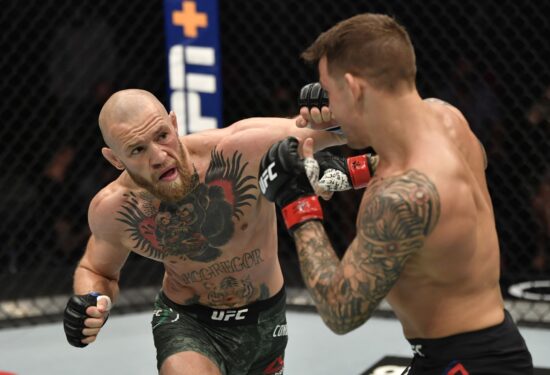 Conor McGregor and Dustin Poirier went toe-to-toe two times already. Once, it was the Notorious who KO-ed the Diamond. In their second fight, it was the other way around.

The image of McGregor arriving at the post-match conference on crutches is something the former UFC Lightweight champ would love to forget. And the only way to do it is by getting revenge. After weeks of negotiations, the news is that the McGregor vs. Poirier 3 is a go.

McGregor vs Poirier 3 Scheduled for July 10

Conor McGregor has confirmed on social media that he will square off with Poirier for the third time. The trilogy fight is supposed to happen on July 10, as the headliner fight of UFC 264.

It’s not yet clear where the event will take place, although there are some reports that the UFC boss Dana White would like to hold it in Las Vegas. Even though we’re still months away from the event, some sportsbooks have already released odds for the big fight.

The last time these fighters were inside the octagon was on January 24, when Portier knocked out McGregor in round 2. The defeat was the fifth career loss for the Irish fighter, who currently has a 22-5 record in MMA.

The last time McGregor won a fight was in January 2020, when he made his UFC comeback following a defeat to Khabib Nurmagomedov. His next opponent is without a defeat since losing to Khabib in 2019.

Obviously, it’s only natural to assume this is going to be an exciting fight. Oddsmakers agree, as evident from the fact that they’re giving almost equal chances to each fighter.

The McGregor vs Poirier 3 might not be the only superlight we’re going to see this summer. Another, perhaps an even bigger fight, is currently being negotiated. What we’re talking about is the potential fight for the UFC Heavyweight title between the reigning champ Francis Ngannou and legendary Jon Jones.

The man who’s #1 in the UFC pound-for-pound rankings wants to return to the octagon, but this time as a heavyweight fighter. Jon Jones has decided to move up a division after conquering (and defending) the UFC Light Heavyweight title.

A few months ago, he decided to vacate his championship belt after a dispute with the organization. In fact, his beef with Dana White seems to be one of the main reasons why the future of the Jones vs. Ngannou superfight is still unknown.

This time, the reason for his beef with White is money. Apparently, the UFC doesn’t want to pay more than $10 million while Jon’s agents are asking for five times the amount.

Jon Jones isn’t the only MMA legend who’s not on friendly terms with Dana White. Cris Cyborg, a former UFC champion, is one of those. After the fight she had with Felicia Spencer in 2019, the UFC decided not to renew her contract.

As a result, she decided to move to Bellator MMA, something she urges other fighters to do as well. In fact, Cyborg has voiced her opinion about Jon Jones’ future, suggesting that he ought to follow her path.

In a tweet she posted on the weekend, Cyborg spoke highly about Bellator MMA, tagging Jon Jones along the way. As of today, Jon still hasn’t responded, although moving away from the UFC does not seem too far-fetched at this point.

Bellator has been working hard on positioning itself as a worthy competitor of the UFC. Over the last couple of years, the promotion has signed a number of MMA stars, including Yoel Romero, Anthony Johnson, and many others.

Another method of attracting publicity is offering free live streams of its events. Last weekend, the company decided to stream all the fights of Bellator 255 on YouTube and Pluto TV. The same should be the case for the event taking place next Saturday.