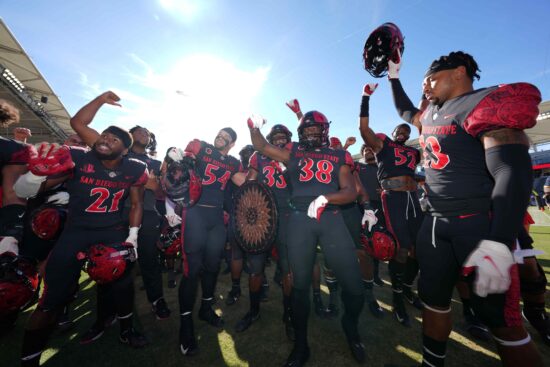 The Utah State Aggies will face the San Diego State Aztecs with a chance for the Mountain West Championship on the line Saturday afternoon. Looking at the numbers, the offense advantages seem to go toward the Aggies while the defensive advantage goes to the Aztecs. With an over record of 13-2 against the Aggies, the Aztecs look to put their margin of victory even greater this weekend.

This is only the second time that the Utah State Aggies are fighting for a Mountain West Championship, the first time they were defeated by the Fresno State Bulldogs, back in 2013. What can Utah State bring to the table in 2021 to potentially flip the script?

The Utah State Aggies offense is averaging 32.2 points per game on 457.9 total yards per game. Those 457.9 total yards break down to 304.8 passing yards and 153.2 rushing yards per game. The Aggies offense is led by their junior quarterback Logan Bonner. Bonner has completed 228 of 378 pass attempts for 3,242 yards while throwing thirty-two touchdown passes with just ten interceptions. The complement the passing attack, the Aggies turn to their junior running back Calvin Tyler Jr. The junior running back has rushed for 723 yards on 153 attempts while finding the endzone five times this season.

The San Diego State Aztecs are no strangers to the Mountain West Championship Game. The Aztecs won back-to-back championships in 2015 and 2016. They are looking to complete their season with just loss and prove to the world that they are a powerful program.

The San Diego State Aztecs’ offense averages 27.8 points per game on 332.9 total yards per game. Those 332.9 total yards break down to 154.3 passing yards and 178.7 rushing yards per game. The Aztecs’ offense is led by their senior quarterback Lucas Johnson. Johnson has completed 114 of 187 pass attempts for 1,091 yards while throwing nine touchdowns and four interceptions. To complement the passing attack of Johnson, the Aztecs turn to their senior running back Greg Bell. Bell has rushed for 949 yards on 209 attempts while finding the endzone eight times this season.