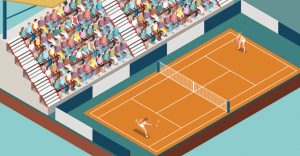 The Nadal vs Sinner match on Monday is a clash between a teenage sensation and an absolute legend of the Rolland Garros. With both players playing very attractive tennis at the moment, an interesting duel is expected in the quarterfinal of the 2020 French Open.

Jannik Sinner got to the quarterfinal after eliminating the 2020 US Open finalist on Sunday morning. Great achievement, there’s no arguing about that. However, there’s one much bigger obstacle in front of him right now – Rafael Nadal.

The Spanish tennis legend is #2 seed, but tennis sportsbooks see him as the main favorite for winning the tournament. Why? Because he’s the King of Clay, who’s won this tournament 12 times already, more than any other player in history.

For oddsmakers, Rafael Nadal is the main favorite for winning the trophy, despite trailing behind Novak Djokovic in the ATP List. The world no.2, however, is famously tough to break when playing on his favorite surface. That surface is clay, which is used at the Stade Roland Garros.

For his imperious performances on this type of course, Rafa got his nickname, the King of Clay. Knowing this, you shouldn’t be surprised by the fact that the Spaniard is the record-holder for the number of men’s singles titles won at the French Open.

Even though the COVID-19 pandemic kept him out of the tennis court for months, his form at the Roland Garros suggests otherwise. He opted out of several tournaments this summer, including the 2020 US Open, meaning that this tournament is his only chance to win one of the Majors this year.

A New Star is Born?

Jannik Sinner is currently #75 in the ATP List, but thanks to his fantastic performances at the French Open, he’s going to climb up those ladders. Nevertheless, the 19-year-old is still far from being thought of as someone who could beat such a tennis legend as Nadal.

He did, however, manage to beat Alexander Zverev in the 1/8-final of the tournament. He dominated this match from the very start. After slightly more than three hours of play, he got himself a victory of 3-1 in sets. Admittedly, Zverev was struggling with fever throughout that match.

Both players have been brilliant so far in this tournament, but the fact is that Rafa is the best player in the history of the game when it comes to playing on clay. The fact that only eight players have managed to beat Rafael Nadal on clay shows why bookmakers think he’s going to win this one.

Furthermore, Nadal loves his French Open, and fans on the stands of Rolland Garros love him as well. This is a tournament in which he’s in a series of all-wins since 2016.

Even then, he didn’t lose because he wasn’t good, but because he got a wrist injury. The French Open has a special place in his heart. You can be sure he’s not going to let Sinner ruin this love story.

Our Nadal vs Sinner pick: