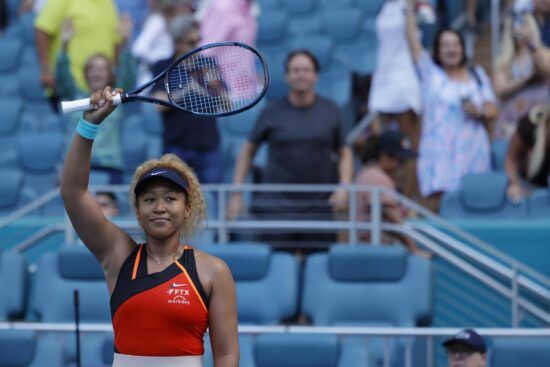 The 2022 Miami Open will see Naomi Osaka and Iga Swiatek battle for the Women’s Singles title on Saturday afternoon. Vegas odds suggest Swiatek will win her third tournament of the year, leaving Osaka without a trophy for more than 13 months.

It’s no surprise that the Polish player is favored by bookmakers. After all, Swiatek is moving to the #1 spot in the WTA Rankings after the 2022 Miami Open.

Meanwhile, Osaka wouldn’t get even near her even if she won the title. It’s because the former world #1 is currently sitting in the #77 position.

The last time Naomi Osaka won a WTA title was in February 2021 when she won the Australian Open. The Grand Slam win brought her to the #2 position in the WTA Rankings, which is where she stayed until summer.

Her fall started in August. After skipping a couple of tournaments and losing some easy matches, Osaka dropped to the #13 position at the end of the year.

Everyone expected her to bounce back straight away in 2022, but she started the year slowly. After an early exit from the Aussie Open, Osaka dropped all the way to the #85 position – her worst ranking since summer 2016.

She did go up in the rankings before the start of the 2022 Miami Open, albeit only slightly. However, if she wins the trophy, she’s likely to move a few dozen positions up. The big question is can she do it? Judging by what we’ve seen from the former WTA #1 so far at Miami Gardens, she might.

She’s dropped just one set in this tournament – against Belinda Bencic in the semifinal. Unfortunately for her, she’s meeting in the final with a player who’s won all of her Miami Open matches in straight sets.

February 16, 2022 – that’s when Iga Swiatek lost a match the last time. Since then, we saw her win 16 matches in a row, winning two titles along the way.

One of those title wins happened less than two weeks ago at the 2022 Indian Wells after she defeated WTA #3 Maria Sakkari in the final. Swiatek destroyed her opponent 6-4, 6-1 in just one hour and 21 minutes. She won the first part of the Sunshine Double, can she win the second as well?

Leading tennis sportsbooks think she will. They’re giving just -196 on the Polish 20-year-old. Are they right to think so?

Naomi Osaka is one of the best players of her generation, the proof is that she’s spent 25 weeks at the top of the WTA Rankings.

Similar to Ash Barty, who decided to retire due to feeling exhausted mentally, Osaka too had her share of issues. For instance, she skipped the last year’s French Open citing mental health as the reason to do it. However, in Spring 2022, she seems happy. And when she’s happy, she can beat anyone.