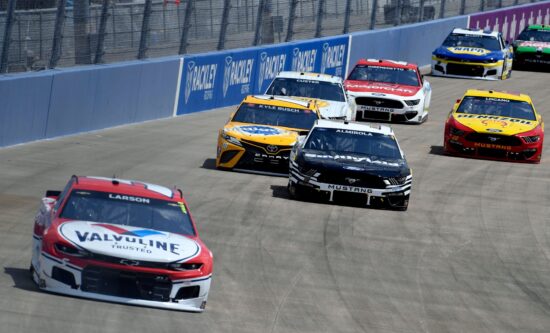 The 19th race of the NASCAR Cup Series takes place this weekend, as the regular season is reaching its gripping climax. Denny Hamlin remains at the top of the Drivers’ Championship, but his search for a first victory of the season continues this weekend.

The Pocono Mountains 350 has been included on the NASCAR Cup Series since 1974 but is now part of a double-header. The first NASCAR Cup Series race of the weekend takes place on Saturday, as the Pocono Organics CBD 325 takes place. It has been a double-headed event since the middle of 2019. The main race on Sunday sees drivers compete for over 350 miles, with the first stage consisting of 30 laps. Both the second stage and the final stage will see 55 laps completed in each. In total, drivers must complete 140 laps to win the Pocono Mountains 350.

There have been a number of name changes for this race in the past. When it was first introduced, it was known as the Purolator 500. However, it has most recently been called the Overton’s 400, Gander Outdoors 400, and Gander RV 400. Two drivers have both won this race on four occasions during their career, and they are Bill Elliott and Denny Hamlin. Hamlin has an excellent recent record in this race, as he has won the last two. Meanwhile, Joe Gibbs Racing are the most successful team with nine wins, while Chevrolet is the dominant manufacturer.

When it comes to the leading contenders for the race this weekend, it would be hard to ignore Denny Hamlin. He has won the last two renewals of this race. Hamlin is currently at the top of the Drivers’ Championship, and a victory this weekend could extend his advantage. However, he has finished outside the top five in each of the last five races and was back in 21st last weekend in the Ally 400, which allowed Kyle Larson to close the difference between the two drivers.

Kyle Busch also has past success at the Pocono Mountains 350, as he has won two times in the past four races. His successes came back-to-back years in 2017 and 2018. Busch is currently sixth in the Drivers’ Championship but has finished in the top ten in two of the last three races. Chase Elliott will be looking to bounce back this weekend after finishing 39th in the Ally 400 last weekend. That result ended his run of four straight podium finishes.

Who will win the Pocono Mountains 350 this weekend:

Hamlin and Busch have both got excellent experience in this race. However, we will side with Kyle Larson this weekend, who has been in excellent form. He has achieved podium finishes in the last six races and has won his last three.