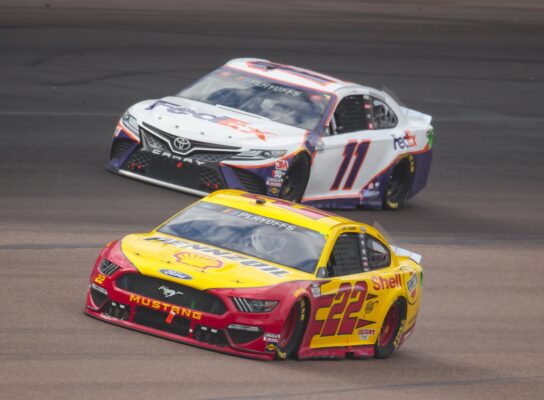 The next big NASCAR Cup Series event is scheduled for this upcoming Sunday at the Homestead-Miami Speedway for the 2021 Dixie Vodka 400. The 400 will be the NASCAR Cup’s third event of the season and it has come with an interesting storyline. And that story is the fact that both drivers Joey Logano and Denny Hamlin will start off on the pole position but not because they qualified to do so.

NASCAR announced that all qualifying races were canceled due to the pandemic, with starting positions determined by a formula. This formula includes the driver’s finishing position in their last race, the car owner’s position from a previous race, the team owner’s ranking in points, and the car’s fastest lap on the previous race.

Still, despite their starting position, star driver Kyle Busch will be looking to knock both men off the pole as he is one of the favorites at this track. This is not surprising at all after he has won at this track in 2015 and 2019. However last year’s champ for this race was in fact Denny Hamlin who is +170 just to make it in the top three due to him dominating the track last year in route to a victory.

In total there will be 38 competitors in this race but it looks like Hamlin, in particular, will have an extra chip in his shoulder for this race. Just this past week, Chris Bell of Joe Gibbs Racing won a race at Daytona International Speedway which prompted former driver and NBC Analyst Kyle Petty to suggest the young Bell was ready to replace Hamlin.

If I’m a veteran driver in the Gibbs organization, I’m looking over my shoulder and in the rearview mirror because I’m watching my replacement out there win the race, win races at the Xfinity level, win races at the Cup level.

Petty said, “that’s got to light a fire under Denny Hamlin.” Hamlin responded to this criticism for his own job security with a screenshot of a headline that detailed how he signed a new contract with Joe Gibbs Racing and how he still had 22 more points than Bell on the season.

Either way regardless of the drama, Sunday should be a great day for racing. According to the Weather Channel there is only a 22 percent chance of rain as it is supposed to be in the high 70s and sunny throughout the entire day. This is a good sign compared to last year as multiple lighting strikes in the vicinity of the raceway caused more than one delay before the race was finished.

It is hard to pick against Hamlin here to finish anywhere outside of the top ten, he has shown to be the most dominant driver so far this season and should have extra motivation to prove that once again due to comments made about him this week.

We’re going to sprinkle the +170 money line for him in the top three, but it should be a lock for top ten.