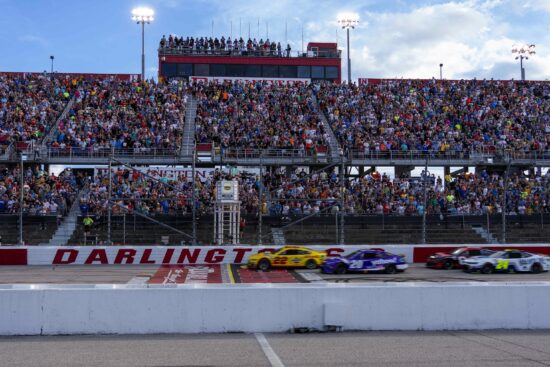 The second race of the NASCAR playoffs takes place this weekend, as Kansas Speedway hosts the Hollywood Casino 400. This weekend’s race promises to be a huge occasion for a number of drivers on the grid, as vital points are up for grabs ahead of next weekend’s race which is the final race before the round of 12.

The Hollywood Casino 400 has been a stop on the NASCAR Cup Series calendar since it was first introduced in 2001. Drivers will complete a total distance of 400.5 miles, which is made up of 267 laps. The first two stages will see 80 laps completed, before the final stage sees the remaining 107 laps completed. Kansas Speedway hosts the race this weekend, which has been won the most by Joey Logano.

It promises to be another exciting race on the NASCAR calendar this weekend, and cases can be made for a number of the drivers involved. There is a new leader in the standings, as Joey Logano moved to the summit after finishing fourth at the Cook Out Southern 400 last weekend. However, his advantage is a slim one, as he sits just six points clear of William Byron. Logano’s record in this race deserves a lot of respect, as he searches for a fourth victory in the Hollywood Casino 400. However, he is without a victory since landing the Goodyear 400.

Byron finished eighth last weekend, but you need to go back even further for his latest success. Tyler Reddick has been in outstanding form over recent weeks, as he finished third in the Cook Out Southern 400 last weekend, and was second in the Coke Zero Sugar 400 just under a month ago.

Chase Elliott was the leader in the standings coming into the playoffs, but he will need to respond after finishing down in 36th last weekend. Kyle Larson also finished outside the top ten, and will need a solid finish this term to ensure his place in the standings.

Logano’s recent form and record in this race is a very easy angle this weekend. However, we like the chances of Tyler Reddick, who has been progressing very well throughout the season.