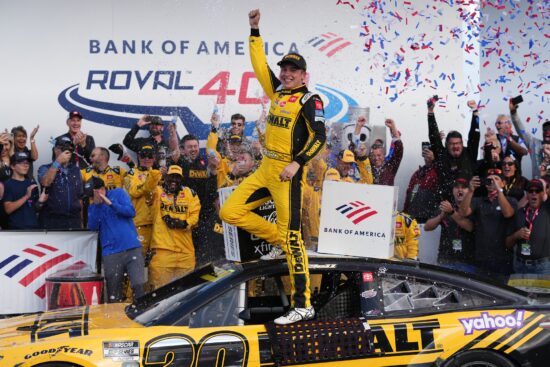 Just four races remain in the NASCAR playoffs this season, and the action swiftly moves to Las Vegas this weekend. The South Point 400 is the first race of the round of 8 stage in the playoffs, and vital points will be up for grabs in Nevada this weekend.

The South Point 400 signals the start of the round of 8 in the NASCAR playoffs. It was previously the fourth race of the round of 12 but was moved following changes to the schedule at the start of this season. It is held at Las Vegas Motor Speedway in Nevada and was first staged back in 2018. The race sees drivers complete a total distance of 400.5 miles, which covers 267 laps in total. The first two stages comprise 80 laps, with the final stage seeing the final 107 laps competed.

No driver has won this race on more than one occasion, with Denny Hamlin winning the South Point 400 for the first time last year. Joe Gibbs Racing is the most successful team with two victories, which is the same number of wins at manufacturer Toyota.

The NASCAR playoffs were shaken up following the Bank of American Roval 400 last weekend. After the race, it was announced that last season’s champion, Kyle Larson, was eliminated from contention. Other drivers to exit the playoffs included Austin Cindric, Alex Bowman, and Daniel Suarez.

Chase Elliott remains the leader of the standings at this crucial stage of the season, as he sits 20 points clear of Joey Logan. Last weekend, Christopher Bell was the winner of the race, as he moved up to fourth in the overall standings. Ryan Blaney still looks to be in a strong position, as he sits 31 points behind Elliott in the standings. It looks set to be one of the closest finishes in NASCAR history, with less than 50 points separating the top eight in the current standings.

It will be an exciting event in Las Vegas this Sunday, with all of the top eight holding solid claims. However, we like the chances of Denny Hamlin this weekend, as he has been in solid form since the playoffs got underway. Last year’s winner of the South Point 400 could follow up his victory this weekend.