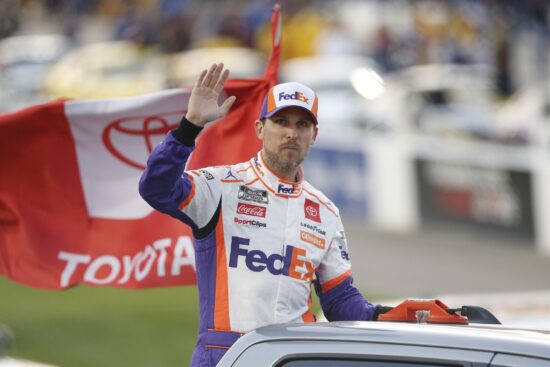 Round of 12 gets underway in the NASCAR Cup Series on Sunday, as the South Point 400 takes center stage
South Point 400 will take place at Las Vegas Motor Speedway

Just 12 drivers remain in the hunt for the NASCAR Drivers’ Championship this season, as the cut-off game last weekend, with Kurt Busch among the drivers being knocked out. The competition steps up a gear this weekend with the South Point 400.

The South Point 400 is one of just two races during the season that is held in Las Vegas, with the other coming in the form of the Pennzoil 400. It is a pivotal race of the NASCAR Cup Series season, as it is the first race of the round of 12 stage. It has been in this position in the calendar since last year. The drivers will tackle 400.5 miles of the Las Vegas Motor Speedway track in the South Point 400, which makes up 267 laps in total. Drivers will compete for over 80 laps in each of the opening two stages before the final stage consists of 107 laps.

This will only be the fourth time that the race has taken place, and no previous drivers has achieved back-to-back finishes. Furthermore, no manufacturer has won this race on more than one occasion in the past. The most recent winner of the South Point 400 was Kurt Busch, but he will not be able to win the race again their year as he was knocked out of the NASCAR Cup Series last weekend.

The betting would suggest that Kyle Larson is the clear driver to beat this weekend. He is a solid +350 chance to win the race after winning the Bass Pro Shops Night Race last weekend. That victory was his first win of the playoffs and also his first victory since claiming success in the Go Bowling at The Glen. His lead at the top of the standings has now increased to 30 points, and that could be extended this weekend.

Martin Truex Jr could be one of his main contenders, as he currently sits second in the Drivers’ Championship. He won the Federated Auto Parts 400 in the second race of the Round of 16 and previously won the South Point 400 in 2019. Brad Keselowski is also a previous winner of the race and will need some positive results, as he is currently tenth in the Drivers’ Championship.

Who will win the South Point 400 this weekend:

Due to the short price that Larson is at to win the race, we will be taking him on this weekend. Denny Hamlin could yet play a role in the Drivers’ Championship as he sits third.

He won the Cook Out Southern 500, before then finished second in the Federated Auto Parts 400 and ninth in the Bass Pro Shops Night Race. He could be a value pick this weekend.