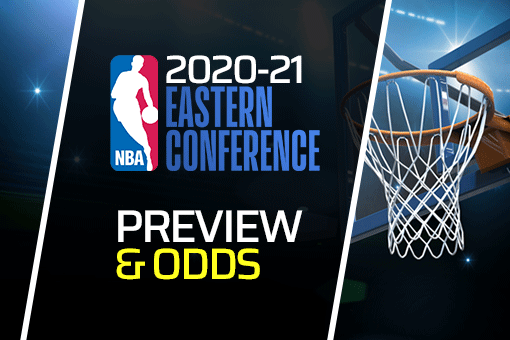 The NBA 2020-21 season is fast approaching, and the teams in both conferences will be looking to get the wins that they need to secure their place in the post-season. There isn’t much question that the Conference that looks the most difficult to determine is the East. But, what do the odds suggest this season?

There wouldn’t be much surprise amongst NBA fans to see the Milwaukee Bucks as the heavy favourites to end the season as the Eastern Conference champions. The Bucks have ended the previous two seasons as the side at the top of the standings, before then coming undone in the playoffs. Last season there was a particular sense that the Bucks were going to go on and dominate in the post-season. However, they would eventually fall to the Miami Heat in a shock result.

The Bucks ended the regular season with an NBA-leading record, as they won 56 and lost just 17 games of the 73 that they played. There will be additional pressure on the Bucks this season, as they look to win a second franchise NBA title after it was recently revealed that Giannis Antetokounmpo has signed a record-breaking supermax deal. The addition of Jrue Holiday also means that there is extra defensive quality, which means that the Bucks could have the steel that they have missed over recent seasons.

Who Could Challenge The Bucks?

The Bucks will be considered the leading side in the East, as they have strengths at both ends of the court. The odds would suggest that the Brooklyn Nets could be the side that is next best placed, but while they may excel in the post-season, they could have struggles in the regular. In Kyrie Irving and Kevin Durant they have exceptional playoff experience, but defensively they aren’t as strong as some of the leaders in the east. The Nets struggle from beyond the arc too. They should be okay come the playoffs, but teething problems will mean that the regular season could be a slog.

The Miami Heat remain definite contenders after reaching the NBA Finals last season, and there is a feeling that they are a side that will continue to develop this term. That is the same that can be said for the Boston Celtics, which will ensure both sides remain contenders. Philadelphia 76ers could be the most interesting selection for gamblers, as they have one of the best five-man lineups in terms of points-per-minute. The Sixers excel at both ends, and also have bench prowess in the form of Matisse Thybulle. It could be an interesting bet for gamblers in the East.

It’s still hard to ignore the Toronto Raptors, as they have typically had one the NBA’s best defensive records under Nick Nurse. They were unfortunate last year in the post-season, and this year they will have more challenges. Serge Ibaka and Marc Gasol have both left, while the Raptors will also be playing their games outside of Canada. The team came together last season after the departure of Kawhi Leonard, and they can’t be ruled out should Fred VanVleet and Pascal Siakam reach the levels that many know that they are capable of.