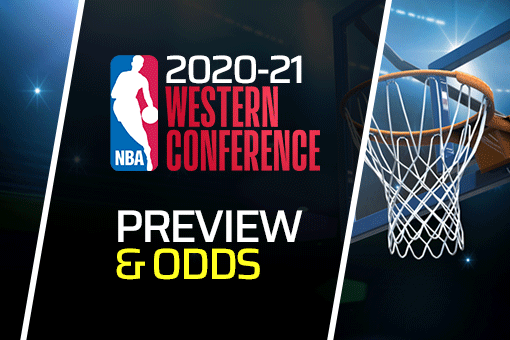 The NBA Champions last season came from the Western Conference, and many experts are already predicting that to be the case once again in 2020-21. The Los Angeles Lakers are the defending champions heading into the NBA 2020-21 season, and they will need to win the Western Conference for the opportunity to defend their crown.

The odds would suggest that the Los Angeles Lakers will once again be the team to beat in the Western Conference this season. They have had a busy off-season building on the structure that they had in place winning the NBA last season. LeBron James and Anthony Davis have both penned lengthy deals with the franchise, and that will certainly indicate that the Lakers are trying to build a dynasty.

The Lakers have continued to build and have added championship experience to their team in the form of Marc Gasol. Questions were raised of Gasol last season, as he averaged just 7.5 points per game for the Toronto Raptors. However, there is no doubt that he brings something different to this team. It’s immediately hard to look past the Lakers, as they looked to click into a different gear once the playoffs started last season. However, no two seasons are ever the same.

Could Any Franchise Challenge The Lakers?

It’s clear that the Los Angeles Lakers will be the team to stop in the Western Conference. Those looking to bet against the Lakers could find exceptional value in the betting on the Western Conference this season. Last season it was considered that the Los Angeles Clippers would be their closest rivals, but defeat in the semi-finals of the playoffs meant that their season ultimately ended in disappointment. It was a difficult campaign for the Clippers as they struggled to create a team ethic full of stars.

However, with Kawhi Leonard and Paul George within their ranks they remain a force to be taken seriously. They will get closer this season, and the arrival of Serge Ibaka could turn out to be one of the deals of the off-season. He already has championship pedigree following his win with the Raptors in 2019, and was excellent in the post-season last term as he averaged a career-high average of 14.8 points per game.

The Dallas Mavericks and Denver Nuggets will both be expecting to build on their performances from last season, and could have enough quality to go deep in the playoffs. However, the selection that really captures the eye is the Golden State Warriors at +2000. Last season was a stop-gap for the Warriors, with a number of their first-team recovering from injuries throughout the season. Steph Curry and Draymond Green will reunite this season, and it could be a decent each-way bet for the Warriors at ridiculously high odds.