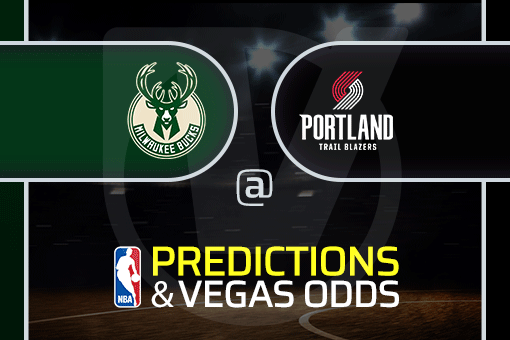 If you’re looking for the latest Bucks vs Trail Blazers prediction, look no further, because Vegas Odds has you covered!

Giannis will look to rebound after a poor second half against the Sixers on Saturday night.

The Bucks and Trail Blazers are both coming off losses. The Bucks fell to the Sixers 110-102 while the Blazers fell to the Jazz 118-113.

The Blazers are 6-2 on the road this season while the Bucks are 8-1 at home this season.

Portland is sixth in the league in opponents’ ppg giving up just 108 ppg.

Milwaukee on the other hand gives up 106.6 ppg to opponents on the season, good for 4th in the association.

This is a matchup between two of the league’s top teams.

The key in deciding a winner in this game will be Portland’s ability to stop Giannis.

Portland will be without its star guard Damian Lilliard as he is out with a strained calf.

The Blazers will need a big game from Simmons and Jerami Grant if they hope to pull off the win tonight.

If picking a winner; the Bucks are the favorite at -9.5 and with Giannis coming off a bad game and no Damian Lillard for the Blazers the Bucks are in a prime position for a win.