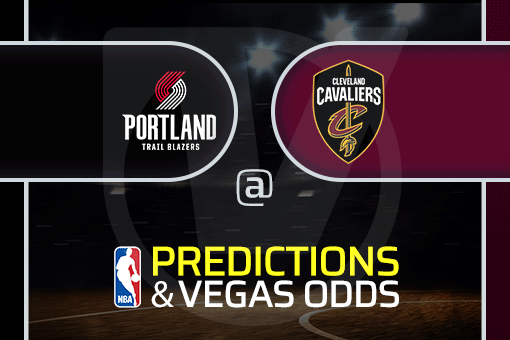 If you’re looking for the latest Cavaliers vs Trail Blazers prediction, look no further, because Vegas Odds has you covered!

The Portland Trail Blazers head to Ohio to take on Donovan Mitchell and the Cleveland Cavaliers.

The Cavs are sitting in 3rd place in the East and are slowly climbing their way up the standings.

Donavan Mitchell has taken over in Cleveland and taking the league by storm. Averaging 29 points a game this season Mitchell is playing some of the best basketball of his career.

With Mitchells’ backcourt mate Darius Garland averaging 23 points a game this season; Cleveland has a winning combination and are showing it early in the season.

The Blazers on the other hand are sitting 8th in the western conference after dropping their last few games.

Portlands star Damian Lillard has been riddled with calf injuries to start the season and is out once again with a strained calf.

The Blazers are averaging 109 points per contest this season – good for 21st in the association.

The Cavs on the other hand are averaging 115 points per contest this season. Putting them at 8th in the league.

The Blazers are 6-3 on the road this season while the Cavs are 7-1 at home this season.

Cleveland is 6th in the league in opponents’ ppg giving up 108 ppg.

Portland on the other hand gives up 108 ppg to opponents on the season, good for 8th in the association.

These are two good defensive teams but Cleveland is 8th in offense this season. Look for this game to go under in total points.

If picking a winner; the Cavs are the favorite at -8.