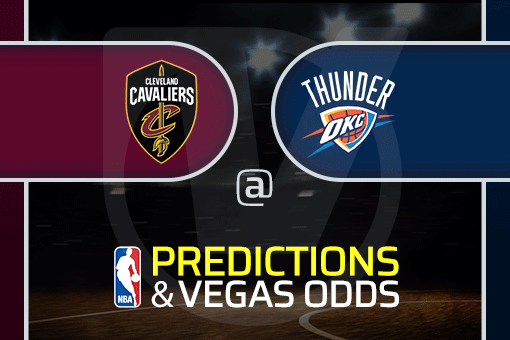 If you’re in search of the latest NBA betting odds and Cavaliers vs Thunder prediction, look no further because Vegas Odds has you covered.

Both teams are trending in the right direction, and we will see a battle of two talented young teams.

The Cavs have been back and forth in January. They won two, then flip-flopped losses and wins. Over the last four games, they have had three losses, with the one win coming against the Milwaukee Bucks.

Giannis Antetokounmpo didn’t play that game, but Evan Mobley broke out with 38 points and nine rebounds. Against the Knicks earlier this week, Donovan Mitchell returned and scored 24 points on 9-24 from the field in a two-point loss at Madison Square Garden.

Getting Mitchell back helps the Cavs, and maybe they can find a way to start making up some ground in the Eastern Conference.

The Thunder are one of the most enjoyable NBA teams to watch this season, even without No. 2 pick Chet Holmgren. They have an 8-3 record in January going into Wednesday’s contest with the Atlanta Hawks, and Shai Gilgeous-Alexander is becoming one of the premier guards in the NBA, averaging 30.7 PPG with 5.5 assists and 4.8 rebounds.

He has scored 20 or more in all of the last 10 games, and he is a walking bucket every single night.

Fellow first-round pick Josh Giddey has broken out this year as well, averaging 16 PPG with eight rebounds and 5.8 assists as he and SGA have formed a terrific 1-2 punch.

Donovan Mitchell returned and didn’t look too rusty for the Cavs, although his 9-24 shooting clip isn’t the most encouraging.

The Thunder are one of the best offensive teams in the country — they rank 5th in points scored — and nobody has been able to stop SGA at all recently. The Thunder get the home victory as SGA leads the way with another 30-point outing.