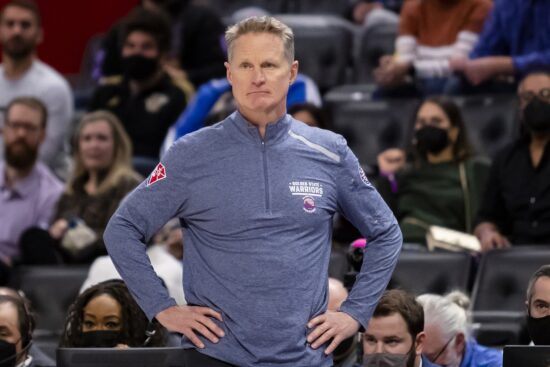 Steve Kerr and the Warriors are the hottest topics in the NBA community, with the Dub Nation currently sitting atop the league. So it is really no wonder to see the 56-year old being the biggest candidate for the Coach of the Year award.

Though, the race will be tough, as several other names are also in the mix. Chicago’s Billy Donovan is close, as well as Erik Spoelstra.

Yes, we are aware that Steph Curry played very well last year and ended up being the league’s top scorer, but this is something different. The swag, the flow, everything in his game now (as well as the Warriors’ game) reminds us of those years when the Dub Nation ruled the NBA and Steph got two NBA MVP awards.

And that is only Kerr’s credit.

He made Golden State the best team in the league, without Klay or Durant, and with several injured players who were supposed to be starters. How? Simply, he improved Jordan Poole, Damion Lee, forced Andrew Wiggins to be more focused on his game and to be poised.

Donovan and the New-Look Bulls

Billy Donovan didn’t get the credit he deserves since coming to the NBA. After losing to the Warriors in the 2017 conference finals, he lost in four straight West first-round series.

After that, he took over Chicago, without too much hype and started to build a team that might become competitive sometimes in the future. And guess what, the Bulls are one of the best teams in the league, with one very well-balanced roster and a couple of big-time stars.

Logically, Donovan, a two-time NCAA champion, immediately emerged as one of the favorites for this award. If the Bulls remain in the top four teams of the East, anything is possible.

Undoubtedly, one of the most significant errors of the league in the past decade is not giving Erik Spoelstra the coach of the year award. Now, we know, many are going to say that he had D-Wade, LeBron, Bosh, and the super team while winning two NBA titles, but just stop there for a moment.

This guy has only two sub-.500 seasons in his entire career. That has to mean something. By far, he has been the most consistent head coach in the NBA over the previous 15 years. The numbers are simply undeniable.

The Heat is looking great, and in our personal opinion, they are one of the best teams in the East, probably the third behind the Nets and the Bucks, meaning that Spoelstra’s chances for finally taking the award could be very high.

We would mention a few other names who are also in the contention. Phoenix’s Monty Williams is +1000, Utah’s Quin Snyder +1200, the same as Steve Nash. Charlotte Hornets have their representative, James Borrego, +1600.