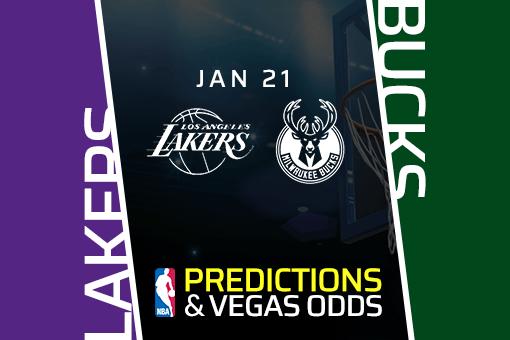 Two of the top title contenders meet at Fiserv Forum on Thursday night, the LA Lakers and the Milwaukee Bucks. They’re both coming into this matchup following losses, Lakers against Golden State, while Bucks vs. Brooklyn Nets.

Overall, the two sides have been playing well and are at the top of respective conferences. There is no need to explain the amount of hype surrounding the game, with LeBron James on one and Giannis Antetokounmpo on the other side.

Purple and Gold Perfect on the Road

In seven road games so far, the Lakers haven’t felt the taste of defeat. They posted two wins over the Spurs, the Grizzlies, Rockets, and one vs. Thunder, not scoring at least 108 points in just one event.

The Lakers snapped a five-game winning streak last night against the Warriors at STAPLES Center, losing that match 115-113, even though having a 14-point lead early inside the fourth period. LeBron and Anthony Davis had just 36 points combined while shooting 6-for-16 each.

What is a positive side in Monday’s loss is the performance of the sidekicks. Dennis Schroder had 25 points, Montrezl Harrell added 17, and Kyle Kuzma 15 with 10 boards. The latter two came off the bench, just for the record.

A big problem for the LAL was the three-point shooting, with them making just 9 downtown hits in 29 attempts.

If the Greek Freak continues to play like this, he will undoubtedly win the third straight MVP award. He would become the first player since Larry Bird in the mid-80s to do the same.

The Bucks played solid defense, forcing 17 turnovers, while they lost only five. However, when it came down to defending shots, Milwaukee failed to stop the hosts, especially from deep. Nets had 54.8% of shooting from the floor, and made 15 threes in 31 attempts.

Lakers vs Bucks Head to Head

The last meeting between the LAL and the Bucks was in March 2020, and that was when the purple and gold interrupted a six-game losing skid against Giannis and the boys. It was a gunfight between Giannis, who had 37 buckets, and LeBron, who ended the night with 32.

Lakers at Bucks Pick and Prediction

As said before, the Lakers are perfect on the road, while on the other side, the Bucks are superb at home, posting six wins in seven events. Plus, both teams lost previous games and now have a massive motive to redeem. This guarantees a huge spectacle at Fiserv.

At the moment, we’re giving a small edge to the Lakers. They are superb on the road and have more offensive options. In certain moments, Giannis will have to face Anthony Davis, which is a completely different dimension compared to his previous guards.