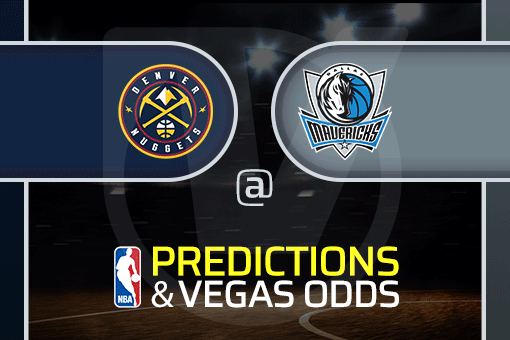 If you’re looking for the latest Mavericks vs Nuggets prediction, look no further, because Vegas Odds has you covered!

Luka Doncic and Nikola Jokic square off in a battle of Europe’s best. As the Mavericks take on the Nuggets at home.

The Mavericks and Nuggets are both coming off losses last night. Dallas fell to Houston 102-92 while the Nuggets fell to the Knicks 106-103.

These two scores can be taken with a grain of salt though; As both MVP candidates, Luka Doncic (34ppg) and Nikola Jokic (20.8 ppg) rested last night for their respective teams.

The Nuggets are 7-3 in conference play this season while Dallas is 4-4.

Denver on the other hand gives up 114 ppg to opponents on the season, good for 19th in the association.

The key in deciding a winner in this game will be three-point shooting. Dallas shot just 21% (12/55) last night from behind the arc against Houston.

Dallas shoots 33% from three on the season on 40 attempts per game. Look for a regression to the mean tonight.

Denver on the other hand shoots 41% from three on the season on 31 attempts per contest.

Luka Doncic and Nikola Jokic, two of the best European talents in the NBA will look to put on a show tonight as these two teams clash in a battle between two of the top MVP candidates this season.

If picking a winner; Dallas is the favorite at -7 and with Luka back tonight a big game is almost certain from the Don.