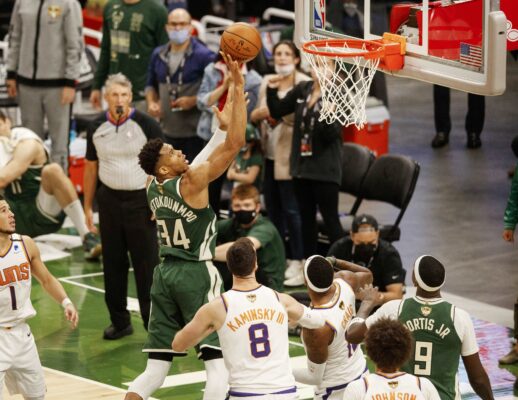 The Milwaukee Bucks made a first break of the NBA Finals, defeating the Suns in Game 5 in front of their fans in Arizona. Giannis and the boys are now getting back to Wisconsin, controlling their own destiny.

The Suns caught up with the Bucks in the finish and even had the chance for a go-ahead basket with the guest being up 120-119. Devin Booker took the responsibility, and while he drove through the middle of the paint, Jrue Holiday ripped the ball from his hands, storming down the court for a fast break.

Meanwhile, Giannis ran too, and eventually finished the possession with a hard alley-oop dunk, plus and-one free throw. He would miss the same but made an offensive rebound, giving the ball to Khriss Middleton. The Bucks forward missed and made one shot, setting the match’s final result, 123-119.

This was a major success for the Bucks, who opened the game very badly, trailing 16 points at the end of the first period, 37-21. But Mike Budenholzer’s side responded very hard in the second quarter, outscoring the rivals, 43-24.

Since that moment, the Bucks were in the lead but couldn’t crack the Suns’ morale and pull away.

Giannis had 32 points with nine boards and six assists, shooting 14-for-23 from the field. Khris Middleton was next in line with 29 buckets, seven rebounds, and five assists, while Jrue Holiday ended the night with 27 and 13 assists.

The newcomer from the Pelicans was very efficient, had 12-for-20 field goals, and was extremely good in the defensive aspect of the match, creating problems for the Suns’ guards when needed.

Pat Connaughton was, as usual, very solid off the bench with 14 points.

Everything looked pretty well for the Phoenix Suns in the opening two matches, but Paul, Booker, and the boys lost their mojo somewhere along the road. We are not exactly sure what happened to them, but this team isn’t looking powerful as they used to do several days ago.

Booker was sharp as usual, scoring 40 points, which was his second consecutive match with 40+productivity. Chris Paul added 21 with 11 assists, but these two guys had five turnovers each, and when we add that Ayton had lost possession as well, things are starting to become clear why Monty Williams’ unit lost Game 5.

Ayton was a factor on offense this time, having a double-double with 20 buckets and 10 rebounds, and Mikal Bridges scored 13.

Both teams had high shooting percentages, Phoenix 55.2%, and Milwaukee 57.5%. When looking at the stats, they were pretty much similar, meaning that slight differences decided the match.

Teams are flying back to Milwaukee now, with Game 6 being set for Tuesday night. It will be a unique chance for the Bucks to win their first NBA title since 1971, when Kareem Abdul-Jabbar and Oscar Robertson led Milwaukee to their only Larry O’Brien trophy.