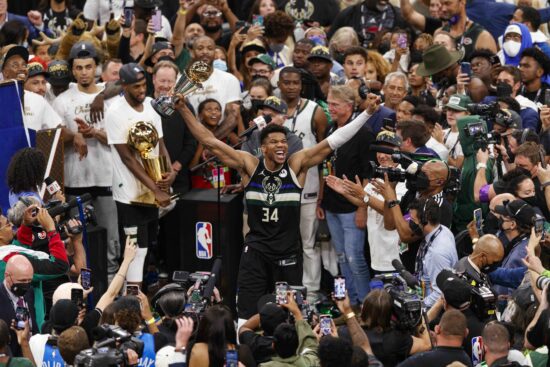 The Milwaukee Bucks are the new NBA champions, with the team from Wisconsin clinching a title following a win over the Phoenix Suns in Game 6 of the NBA Finals, 105-98.

This is the first title for the Bucks after 1971 when they defeated the Baltimore Bullets in the finals. That team featured two Hall of Fame members, Oscar Robertson and Kareem Abdul-Jabbar.

The Greek superstar had a superb session in the finals, scoring 50 points in Game 6, which was his third game in the series with 40 or more points. He would tie Bob Pettit’s record for the highest-scoring closeout Finals match.

The two-time NBA MVP scored 50 points while shooting 16-for-25 from the field and 17-for-19 from the free throws. He delivered 33 buckets in the second half. Giannis’ percentage from the free throws was something that surprised the public. Antotekounmpo was around 55% from the foul line, and last night shot as if he was one of the best guards in the league.

“I made my free throws tonight, and I’m a freaking champion,” he said following the match, mentioning all the doubts surrounding his shooting accuracy.

Besides game-high scoring productivity, Giannis had 14 boards and five blocks, controlling the pain on the defensive side better than ever. He is the main reason why Deandre Ayton had just 12 points and six boards.

Apart from Giannis, Khris Middleton added 17 points, five rebounds and assists each, and four steals. Bobby Portis was a factor off the bench with 16 buckets, while Jrue Holiday missed a triple-double for one board, 12 points, 11 assists, and nine rebounds.

Regarding Giannis’ NBA Finals award, this is the first time all three NBA individual awards went to the hands of European players, as Nikola Jokic won the NBA MVP award and Rudy Gobert the Defensive Player of the Year award.

After taking a 2-0 lead in the series, many already saw the Suns near the trophy. But somewhere along the road, they slipped and experienced a tough loss.

Devin Booker was not a factor in this match, scoring only 19 points, with a miserable percentage, 8-for-22 and 0-for-7 for three. He was heavily frustrated by PJ Tucker and Jrue Holiday, and the Suns’ guard often criticized the officiating criteria throughout the series. Just to mention that tonight, Giannis had as many free throws as the entire guests’ team.

Chris Paul had a team-high 26 points, but that wasn’t enough for the guests who opened the game poorly but managed to flip the result until halftime. However, Phoenix’s finish wasn’t that powerful, which is the reason for tonight’s loss.

This is the end of the NBA season, but not the end of the competitive campaign for three players, Holiday, Middleton, and Booker, who are now heading for the Tokyo Olympics to represent the US basketball team.