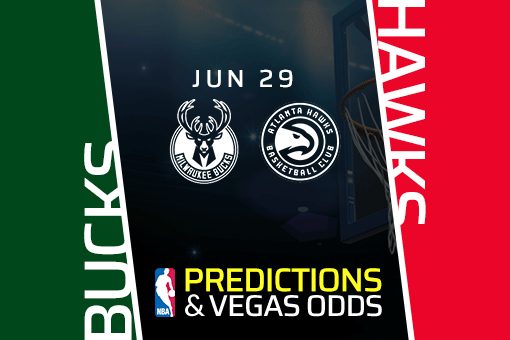 The Bucks have a nice chance to push the rivals into a hole and secure themselves a two-game lead in the series, as well as the opportunity to solve the series at Fiserv Forum on Thursday night.

All the eyes pointed towards Trae Young, who picked up a nasty ankle injury in Game 3 and is uncertain for tonight’s event.

So the Hawks scored 91 points in Game 2 and 102 in Game 3, which is why they lost these two events. We are well aware that the outcome might have been different if Trae Young played in the final period of the latest match, but he didn’t.

In Game 2, Young scored 15 points, and his entire team made nine threes. Also, in both contests, the Bucks superbly controlled the glass, having 28 boards more combined, which not only allowed them to have second-chance points but prevented the rivals from having the same.

What is a big deal is that Khris Middleton woke up and started playing as he should. Middleton poured 38 buckets in Game 3, 20 in the final sequence, taking over and once again proving that his offensive contribution is the difference-maker in Milwaukee’s games.

Trae has a bruised bone in his foot, and he is questionable for tonight. We are aware that the Hawks’ medical team will do everything possible to get him ready for tonight’s matchup. Still, even if they do, nothing guarantees that the young playmaker will positively impact the game.

He is the absolute leader of the unit, scoring 298 points and dropping 9.5 dimes per night. The way he smoothly handles rivals’ defenses is incredible, and we can already say that he has Hall of Fame potential.

In this case, Bogdan Bogdanovic will have to step up and start contributing. The Serbian shooting guard struggles with knee problems, but despite all that, he has to replace Trae in both scoring and organizing the offense.

Bucks vs. Hawks Head to Head

Bucks vs Hawks Prediction and Pick

The situation with Trae Young has got us thinking. There is no way for the Hawks to be at the same production level, with or without Trae in the lineup tonight. Even if he plays, that won’t be 100%. It implies that the Hawks will score fewer points and that the game’s flow should be slower. It is why under 219 points seems like a perfect choice for Tuesday’s game. Milwaukee’s D will have an easier task than usual.