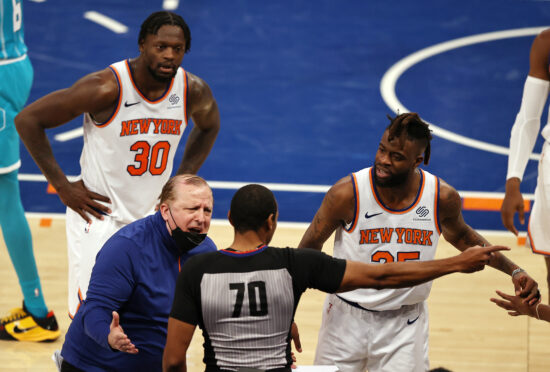 The Boston Celtics are in a tough position. They are playing pretty mediocre in recent times, and besides that, have numerous injury troubles. On the other side, the Knicks are solid and even have a chance to clinch the fourth spot in the East, which would be a massive success for this unit.

Cs Without Brown, Future not Bright at All

Jaylen Brown was pulling the Cs throughout most of this season. That is he and Jayson Tatum. These two youngsters are the heart and the soul of this team, and having one of them ruled out is a big deal for Brad Stevens.

His wrist injury was a big blow for Boston. It could be said that the team took a massive psychological hit, losing one of its best players in the most important part of the season. So it’s no wonder why they had four straight losses before beating the Timberwolves on Friday, 124-108.

The Cs appeared without Walker in that one as well, and Tatum and Fournier led the way in Minneapolis. Tatum had 26 points and 11 boards, while Fournier scored 18 with five threes. Tremont Waters added 14 off the bench.

Tom Thibodeau made one very competitive and tough unit here, which relies mostly on defense. And you know what? We like it. To be honest, the NBA needed one physical team, and the Knicks are exactly like that. Right now, they have a chance to be the fourth team in the conference, which is undoubtedly much higher than anyone could anticipate before the year started.

NYK looks much better than their division rivals, winning three of the past four games. That one defeat came against the Lakers following OT, 101-99. The Knicks’ last contest also saw overtime, against the Hornets at Madison, 118-109.

Julius Randle, the guy who will most likely win the Most Improved Player of the year accolades, had another triple-double – 33 points, 13 assists, and 10 boards. Reggie Bullock had 17 and Derrick Rose 15 off the bench.

Celtics vs Knicks Head to Head

The first H2H matchup between these teams was in Boston, and the guests triumphed, 105-75. The second was at the TD Garden as well, but this time the Celtics managed to win, 101-99.

Celtics vs Knicks Prediction and Pick

Besides Brown, the Celtics have several other players unavailable for this event, among them Marcus Smart, Kemba Walker, Tristan Thompson, and Robert Williams probably. Meanwhile, the Knicks are pretty much complete, and what is more important, they play well. Unlike the Cs, who can’t go up or down in the standings, New York has a lot at stake and needs to triumph. So, the choice here is pretty obvious: