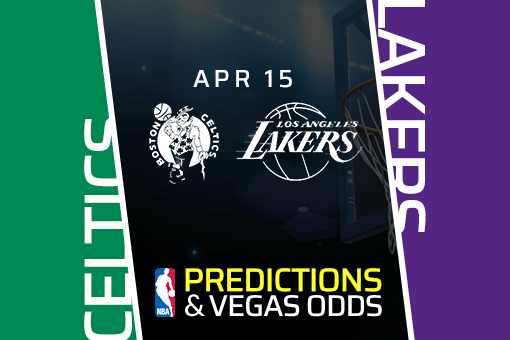 The Boston Celtics wrap up a quick three game West Coast road trip on Thursday night with a great chance to push their current win streak to five games. Brad Stevens’ team is a -6 point favorite when they visit the Los Angeles Lakers, who are coming off a win but are also just 6-8 since the Lebron James ankle injury on March 20th.

It wasn’t too long ago that Boston looked like they were going to have to fight and scrape to hold on even to the 8 seed in the East. The Celtics had lost six of eight at one point earlier in the month, but seem to have righted that ship with wins in six of the last seven.

This current streak includes a 105-87 win in Denver on Sunday and edging out Portland 116-115 on Tuesday. Jayson Tatum has averaged 30 points in those two victories while Jaylen Brown has chipped in 20 and 24. The Lakers are pretty stout vs. those positions though, ranking 6th vs. the PF and 5th best vs. the SF.

Thursday’s contest could be on the lower scoring side of the 212 betting total. Even with mounting injuries the Lakers have held five of their last seven opponents to 104 points or less. Boston doesn’t have their usual elite defense this season, but still rank a respectable 12th in efficiency on that end of the court. The Celtics have also held three of the last six opponents under 100 points.

Can L.A Grind One Out?

The Lakers play their first home game in April on Thursday night after being on the road for the last seven (including a visit across the hall to play the Clippers). It was a 4-3 trip, which has kept Los Angeles afloat as the current 5th seed in the Western Conference.

L.A has run a slightly faster pace at home this season, but the meeting with the Celtics will likely be another grind-it-out, methodical performance. The Lakers have alternated wins and losses over their last eight games, and have put up 104 points or less in five of those.

Frank Vogel does run more of a half court offense now that newly acquired big man Andre Drummond is in the starting lineup. Drummond does have double digit rebounds in four straight, but also only has four total assists over that span. Boston has had their struggles vs. passing centers lately, allowing 9+ rebounds but also 7+ assists to the last three bigs they’ve faced.

Is Boston a bit vulnerable here at the end of a quick road trip or will they dominate a Lakers team that lost by 15 at the Knicks this week? L.A is also playing their first game back at home in over two weeks, which should give them the edge to at least keep this one within 6 points.