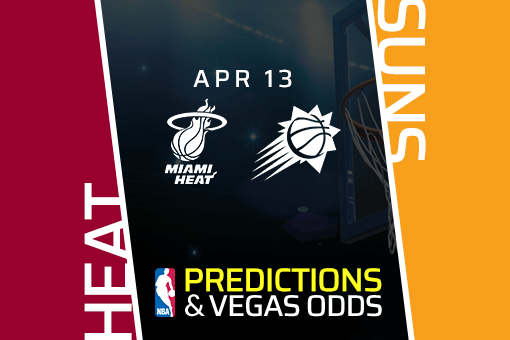 The Phoenix Suns thought they were cruising to a victory on Monday night, up by 24 points at one time before a big Houston comeback in the 126-120 Suns win. That’s using some extra effort prior to the short turnaround when the Miami Heat visit on Tuesday night. Miami is rested and has wins in six of their last seven, but oddsmakers still give Phoenix a slight -3.5 point edge at home.

There were some thoughts that Miami might be a bit vulnerable as +1 point underdogs at Portland on Sunday seeing as the Heat were making their first trip to the West Coast since early February. That notion was dispelled in a 107-98 win that wasn’t even that close considering Miami held an 18-point lead heading into the 4th quarter.

It was another great defensive effort for the Heat, holding the Trail Blazers’ #7 scoring offense to under 100 points. It should be noted that Portland was playing on 0 days rest – like Phoenix is on Tuesday – but holding Damian Lillard to 12 points and CJ McCollum to 17 is still impressive.

Phoenix being a -3.5 favorite is somewhat surprising on the back to back. Granted the Suns are at home where they are 20-8 on the year, and have covered the spread in 9 of their last 13 on 0 days rest. Monty Williams’ team has also won 9 of their last 10, and are just 1.5 GB from Utah for the best record in the NBA.

The Suns also didn’t burn up as many minutes as you’d think despite beating the Rockets by only six points on Monday (as -12.5 favorites). Chris Paul logged just 26:36, and two other starters played less than 30 minutes of court time. Phoenix shot 25-45 (56%) from beyond the arc vs. the Rockets.

Devin Booker did play 34:09 vs. the Rockets, but he played 36+ last week a night after logging 43 minutes in an OT win over the Jazz. Booker’s scoring has waned a bit since a stretch of four straight 32+ point games, being held to 27 or less over the last three. Miami also ranks 11th defensively vs. the SG, so it may be another less-than-stellar night for Booker.

Miami’s Jimmy Butler may also be in for a tough night as Phoenix is 2nd best in the NBA at guarding the SF position. Butler had just 14 points when the teams met up on March 23rd in a 10-point Suns win, and without a strong showing from their leading scorer the Heat cannot keep this one within 3.5.