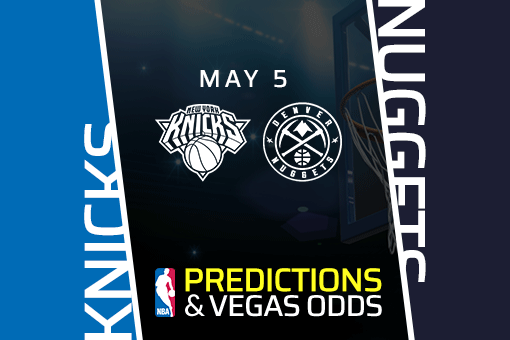 The New York Knicks have bounced back nicely from a loss to the Suns, winners of three straight games and 12 of their last 13 overall. NYK definitely has a challenge on Wednesday however, visiting the Denver Nuggets who have won 9 of their last 11, and are 24-10 at home on the season. This should be a good one, but oddsmakers still have Denver as the -3.5 favorite.

The loss to Phoenix must have sparked something in the Knicks, as they’ve won three straight and by 19, 25, and 14 points. It’s not like the Suns are bad as they are tied for the best record in the NBA, but Tom Thibodeau clearly has this New York team getting angry about losses.

New York has gone 6-3 in their last 9 road games, and those three losses came by a combined 5 points. The Knicks have a great chance to keep Wednesday night’s matchup in Denver close, especially since the Nuggets just lost 93-89 to the Lakers on Monday. Expect a very similar game, as the Lakers have the top defensive efficiency in the NBA – but the Knicks are 3rd in that category.

Strong play from Julius Randle has been the key to New York’s success lately, as it’s been all season. Randle has scored 28+ in 8 of the last 10 games, but he’s getting plenty of help recently – most notably from the resurgent Derrick Rose. The former MVP has put up 24.5 ppg on this current 2-game road stretch, and the Nuggets are a bit shorthanded in the backcourt.

Denver to Feed the Big Man?

Nikola Jokic is on the injury report with a toe ailment, but he’s probable for this one. That’s not good news for the Knicks, who have struggled vs. opposing C’s this season. Jonas Valanciunas has a 16-round game and Nikola Vucevic grabbed 18 boards vs. New York in the past week.

Jokic is back to his ceiling productivity levels as well, scoring 30+ points in three of the last four while grabbing 34 rebounds the last three games. Denver has a very formidable frontcourt as Michael Porter, Jr. has come into his own with 25+ points in 5 of his last 7.

About that Denver backcourt though. The Jamal Murray ACL injury is a likely death blow to any Denver championship hopes, but they are way more banged up than just him. PJ Dozier (groin) will miss Wednesday’s game joining Will Barton (hamstring) and Monte Morris (hamstring) on the bench. At the same time, guard is the Knicks deepest position.

We can all agree Jokic will likely get his in this spot. It seems like the Knicks can survive that though as New York is a top 10 team defensively vs. Porter at the PF spot, and the Nuggets are down to their 4th or 5th option at the guard position.