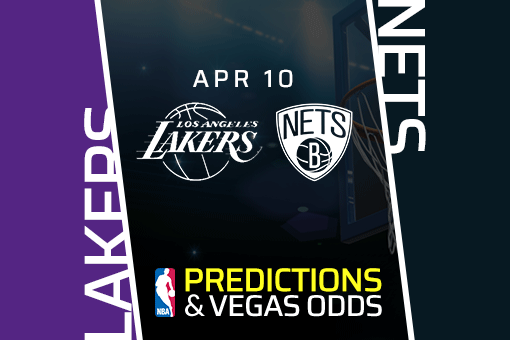 The Los Angeles Lakers at Brooklyn Nets game would’ve been scheduled Saturday night viewing, but this game loses a lot of star power with Lebron James, Anthony Davis, and James Harden all out of the lineup. L.A is a shell of their former selves without James and Davis, going 4-7 over their last 11. As a result, oddsmakers aren’t expecting much of a game, making the Nets -11.5 favorites.

L.A Have Any Shot at the Upset?

That 4-7 stretch over the last 11 for the Lakers started when James sprained his ankle against Atlanta on March 20th. That injury kick started a four game losing streak, but you have to give the Lakers a little bit of credit in at least going 2-2 over their last four.

Then again L.A’s four wins since the James injury have come against Cleveland, Orlando, Sacramento, and Toronto – all teams that are sub .500 by at least 8 games and (extremely) likely to miss the playoffs. During this stretch, Los Angeles has lost by 17 to the Suns, 17 to the Pelicans, 15 against the Bucks, and 18 to the Clippers.

Los Angeles is still doing a decent job defending, holding 8 of 11 opponents to 110 points or less – but they have no scoring. The Lakers offense has also been held to 105 points or less in 8 of the last 11. The Nets don’t have a very good defense by any means, but the Brooklyn offense makes up for that. Can L.A hang in a high scoring affair?

Brooklyn Ready for the Blowout?

It looks like this showdown of superstars will have to wait until both teams make the NBA Finals, but Brooklyn would still like to send a message on Saturday night. The Nets have won 8 of their last 10, and know they can’t let this matchup get away as they hold a one game lead over Philadelphia for top spot in the East.

Harden is still out for another week or more, but Brooklyn did welcome Kevin Durant back on Wednesday. His services weren’t really needed in a 139-111 win over New Orleans (who was playing on 0 days rest), but Durant did hit all five of his FG attempts playing 19 minutes off the bench. Brooklyn has also had the last two nights off heading into Saturday night’s home tilt.

This isn’t necessarily an open-and-shut play on Brooklyn -11.5 however. The Pelicans were very fatigued in Wednesday’s blowout loss, and prior to that the Nets struggled to a 114-112 win over the Knicks and were beat 107-115 against a Chicago team that had been slumping. Over the last 7 games Brooklyn has beat Detroit by 2, Minnesota by just 5, and Houston by 12 which are some close contests against bad teams.

L.A has had a tendency to let some games get away from them lately, but they did play the Heat tight in a 110-104 loss on Thursday. Newly acquired Andre Drummond was a presence with 15 points and 12 rebounds, and the Nets have struggled vs. bigs all season.