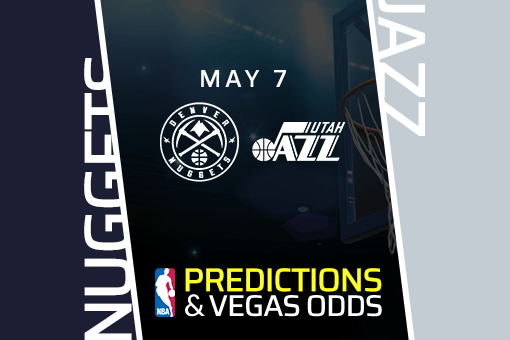 The Utah Jazz have survived some rocky waters to put together a three game win streak and a 1-game lead over the Suns in the Western Conference. The Jazz had lost three of four before that though, and their wins came against the Spurs (twice) and the Raptors. Things definitely get tougher with the Denver Nuggets visiting Salt Lake City, winners in six of their last seven games. Utah is still a -4 favorite though.

Nuggets on a Roll

Denver’s only loss in the last two weeks was a 93-89 loss to the Lakers. It looks like the Nuggets offense was dominated in that one against Los Angeles’ #1 unit in defensive efficiency which would put them in a tough spot vs. a Utah team that ranks 3rd in that category.

Denver had a bounce back game last time out though, winning 113-97 over a red hot Knicks team. New York also has the 4th best defense in the league, so it was a nice win to put the Lakers loss in the rear view. The Nuggets also got the W while debuting a new starting lineup, with Michael Porter, Jr. moving to guard after a rash of injuries to the Denver backcourt.

With Denver though it always comes down to Nikola Jokic. The big man had 32 points and 12 rebounds vs. New York, the fourth time in his last five games going for 30+. Utah is a top 10 team vs. the C position, but Jokic has 35/14/9 and 47/12/5 in splitting two games with the Jazz this season.

The Jazz have a three game win streak going but it’s come against a Spurs team that has dropped five straight and an inconsistent Raptors squad that is going to miss the postseason at 27-40. We will find out if Utah is for real with Denver coming to town.

Nobody blames Utah for some inconsistent play lately, as they are just riding the wave until Donovan Mitchell can get back from his ankle injury. Mike Conley missing the last five games (hamstring) doesn’t help either, but the Jazz are 4-1 over that span.

Much like Denver, the Jazz are just trying to get by during injuries – recently moving Royce O’Neale to the starting guard spot. Bojan Bogdanovic has stepped up in Conley’s absence, scoring 22+ in five straight. Jordan Clarkson continues to be a threat off the bench too, scoring 30 in Wednesday’s win over the Spurs.

Denver looks like the deeper team in this one, and Jokic has dominated the Utah front court in two games this season. Both teams are thin at the guard spot, but the Nuggets moving Porter, Jr. to the backcourt is intriguing and possibly a game changer moving forward.