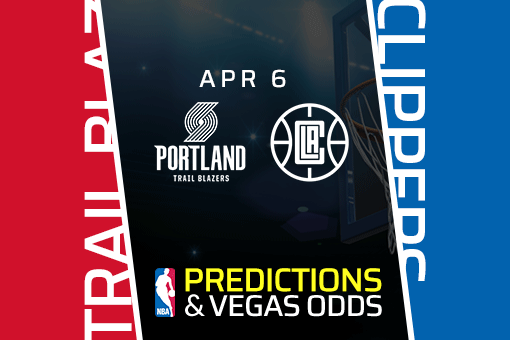 Two games separate the Portland Trail Blazers and Los Angeles Clippers in the jam packed Western Conference. Both teams are 7-3 over their last 10 games, so Tuesday night’s clash should be a good one. Oddsmakers have set the Clippers as -5.5 favorites as they try to improve on their 18-8 home record. Portland meanwhile is a very good road team, going 15-9 away from the Moda Center.

Portland Back on Track

The Trail Blazers had posted wins in 7 of 9 games until visiting Milwaukee handed them a 127-109 defeat last Friday. Portland bounced back in a huge way the next night though, beating Oklahoma City 133-85 to even cover the enormous -12.5 spread.

Now Portland will have had an extra day of rest – which almost seems like more considering how easy the win over the Thunder was. No starter played more than 26 minutes vs. OKC, and that victory also helped the Trail Blazers establish some bench depth as five reserve players scored in double figures.

It will be the starters who are called upon Tuesday night however against the Clippers’ #10 ranked defensive efficiency. LAC ranks 18th defensively vs. the PG position and 15th vs. the SG. Good but not great, which at the very least gives Damian Lillard and CJ McCollum the potential for a big night.

Can Clippers Shut Down Lillard?

This will be the second meeting of the season between these two teams with the Clippers notching a 128-105 win back in December. That game was also at the Staples Center, and LAC was also a -5.5 favorite and covered the number easily. Los Angeles held Lillard to 20 points while shooting 3-14 from the field, and would welcome a similar performance in the rematch.

Something to watch in every LAC game is their health and availability. Serge Ibaka and Patrick Beverley remain out, but Kawhi Leonard and Paul George have both been in the lineup together the last two games. Leonard had 28 points in the first meeting with the Trail Blazers, while George added 23 points and 10 rebounds.

It’s hard to take too much from the first meeting between these two teams since it was way back in December. Portland has played very well since getting McCollum back from injury and acquiring Norman Powell at the trade deadline. The Trail Blazers also play very well on the road, meaning an upset isn’t out of the question, especially the way the Clippers lost to Orlando last week.