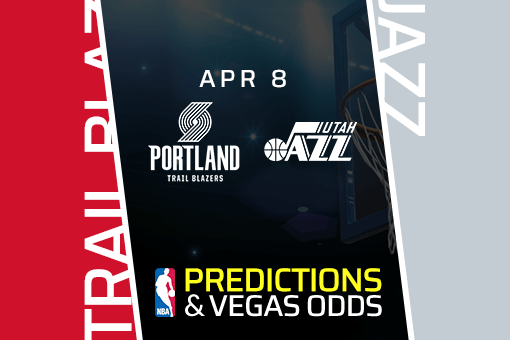 The Utah Jazz are 22-2 on their home court this season, but that will be put to the test when the Portland Trail Blazers visit on Thursday night. The Jazz are on the short turnaround after a 117-113 loss in OT to Phoenix on Wednesday night, but are still a -6.5 favorite vs. Portland.

Portland would like a bounce back game, but that’s easier said than done against the best team in the NBA. The Trail Blazers didn’t look too hot vs. another playoff contender on Tuesday, falling 133-116 at the Clippers as +6.5 underdogs.

The Trail Blazers’ defense continues to be a concern, allowing L.A to shoot 52% from the floor on Tuesday while Paul George (36 points), Kawhi Leonard (29), and Reggie Jackson (23) all had huge scoring nights. That was the second huge loss in the last three games for Portland, also falling 127-109 at home to Milwaukee last Friday as the Bucks shot 54% from the floor.

The good news for Portland is that Utah is on 0 days rest – and off a game that went into OT. Utah’s #4 defensive efficiency unit will be a bit worn down, but can the Trail Blazers’ offense take advantage? The Jazz held Damian Lillard to 9 points in their only other meeting this season, but that was the first game of the season which was a 120-100 Utah road win.

Will Utah Be Fatigued?

The Jazz are tops in the NBA with a 38-13 record, but find themselves on a somewhat rare 2-game losing streak. Besides the 117-113 loss to Phoenix, Utah also fell 111-103 in Dallas on Monday. Is Quin Snyder’s team in danger of making that three straight L’s as they play on the back to back?

Donovan Mitchell had 41 points on Wednesday against a very good Suns defense. He also logged 40:53 of court time however. On a positive note for Mitchell, he won’t face much resistance from a Portland team that ranks 29th in the NBA defensively vs. the SG position. Rudy Gobert chipped in 16 points and grabbed 18 rebounds vs. Phoenix, and the Trail Blazers could be a man down in the front court as Jusuf Nurkic missed Tuesday’s game with knee inflammation.

Even on the short turnaround, Utah is a fairly significant favorite on Thursday. That’s due mostly to Portland’s #29 ranked defensive efficiency. The Trail Blazers looked solid in a recent 4-game road win streak, but those came against a Jimmy Butler-less Heat, as well as Orlando, Toronto, and Detroit. The Trail Blazers just look overmatched against top tier competition.

Portland looks like a tempting play getting the +6.5 points against what could be a fatigued Jazz team, but Utah simply dominates when on their own court. The Jazz shut down Lillard and company once this year, and there’s a very good chance they repeat that feat.