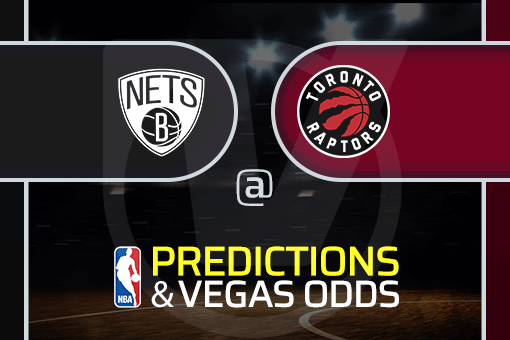 If you’re looking for the latest Nets vs Raptors prediction, look no further, because Vegas Odds has you covered!
Jump to:

The Nets head on the road to take on the injury-ridden Raptors.

The Nets and Raptors are in similar situations right now.

That situation is right in the midst of the pack and in full grinding mode.

Brooklyn has been grinding all season long. With the turmoil surrounding the team since opening night, the Nets have come alive of late.

The Nets are sitting in 10th place in the East and are slowly climbing their way up the standings.

Ben Simmons is finally starting to look like the star he was a few years ago and Kyrie Irving is back playing again.

The Nets are looking to be the championship-caliber team they were pegged to be early in the season.

The Raptors on the other hand are sitting 7th in the eastern conference.

Toronto has been riddled with injuries since a hot start to the season.

The Raps are averaging 112 points per contest this season; Good for 15th in the association.

The Nets on the other hand are averaging 111 points per contest this season. Putting them at 16th in the league.

The Nets are 4-5 on the road this season while the Raptors are 6-1 at home this season.

Toronto is 10th in the league in opponents’ ppg giving up 110 ppg.

Brooklyn on the other hand gives up 111 ppg to opponents on the season, good for 13th in the association.

If picking a winner; the Raps are the favorite and should be backed accordingly.