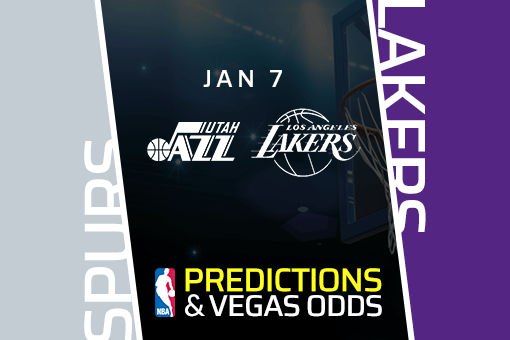 The NBA champions are hoping to prolong their winning series to the fifth straight game. For that to happen, they need to win the Spurs at Lakers game. Odds favor the Lakers to win, but the same was the case when the Spurs played against another Los Angeles team. Against the Clippers, they were +260 underdogs pre-game but managed to win by 116-113.

Can the Spurs upset the odds once again? If they do it, it’s going to be their first win in Spurs vs Lakers games since 2018. All of their previous five meetings were won by the team from California.

The Los Angeles Lakers are the #1 favorites for winning the NBA Championship at the end of the 2020-21 season. At the moment of writing, the NBA odds on the Lakers are about +225, which is way shorter than the odds on all the other teams.

Speaking of odds, they’re suggesting the LA team should win the Spurs vs Lakers comfortably. That’s no surprise considering that the Lakers are at the very top of the Western Conference, with their score being 6-2. Conversely, their opponents are currently 9th in the Conference, with 3-4.

The Lakers’ performances in the 2020-21 season cannot surprise anyone who had a chance to watch their games last season. They were brilliant last summer, destroying every team on their way to the title. Fast-forward a couple of months and their roster is practically the same as the one that won them their 17th NBA title in history.

LeBron James and Anthony Davis is the best duo in the NBA, there’s no arguing about that. The two have been fantastic this season, in practically every area of the game.

LeBron is the team points leader with 23.9 per game; Davis is just behind with 22.3. Anthony Davis is the leader when rebounds are concerned; LeBron is just behind. We could go on like this for many other stats.

The two were fantastic in their most recent game, when the Lakers defeated the Grizzlies by 94-92. In that game, we saw both of them scoring 26 points.

Still, even though the two have been instrumental for the Lakers success this season (and the last one), this team has plenty of other fantastic players on the roster. Some of the Lakers players who deserve a mention include Dennis Schroder, Marc Gasol, Kentavious Caldwell-Pope, Kyle Kuzma, and so on.

Spurs Take Down Clippers, Can They Beat Another LA Team?

After losing four straight games, the Spurs have bounced back with a big win. On Tuesday evening, they beat the favored Clippers by three points difference. Sure, it was a nerve-wracking game that could’ve gone either way until the very last couple of moments, but their performance at Staples Center has certainly given the Spurs a huge confidence boost.

Apart from putting an end to San Antonio’s losing streak, the Spurs at Clippers game is important for another reason – LaMarcus Aldridge has made his comeback.

After missing out on a couple of games due to a knee injury, the Spurs’ arguably most important player returned on Tuesday and did pretty well on the court (14 points, 6 rebounds, 2 assists).

Another big milestone is that Patty Mills had the game of his career that evening. Aussie veteran scored the record number of three-pointers (eight), pumping up his tally to 27 points in total in the game.

This is going to be a tough one. Both teams are probably very eager to get on the court, which promises a lot of entertaining moments. Still, the fact is that Los Angeles is a better team.

Anything but a Lakers win would be a surprise. However, the Spurs definitely seem capable to ruin things for those who’d like to back the Lakers to cover the spread.