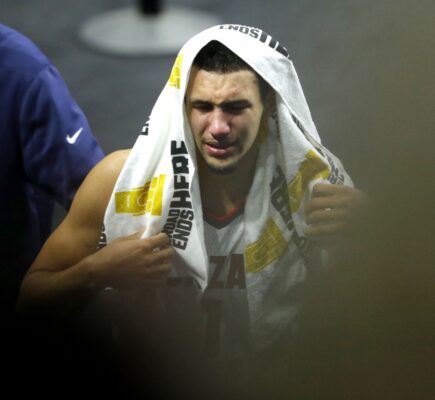 There was much action in Las Vegas last night. The Summer League provides excellent basketball, being a perfect replacement for the regular and playoff NBA contests.

The fifth and the second pick from the 2021 NBA Draft, Jalen Suggs, and Jalen Green, picked up injuries during the previous contests. While the Orlando Magic’s player isn’t going to pay the remaining part of the Summer League, things with Green aren’t that clear, and the Rockets’ shooting guard will have to undergo an MRI.

According to Houston’s medical staff, Green has a sore hamstring, but that isn’t a “significant concern.” However, they want to check it out and then decide what to do with the rookie shooting guard. Per some sources, it is very likely that we won’t see him playing the Summer League anymore.

On the other side, Suggs sprained his thumb against the Boston Celtics on Thursday night and will definitely sit out the remainder of the Summer League. Suggs landed awkwardly following one drive to the basket, and after that, left the game without coming back.

Suggs and Green are among the biggest favorites for winning the NBA Rookie of the Year Award. Suggs is fourth on the list +650, while Green +340 trails only the top selection from this draft, Cade Cunningham, who appeared tonight in Las Vegas.

Cunningham’s First Win With the Pistons

The top selection from this draft scored 24 points and was the top scorer in his Detroit Pistons. The team from the Motor City posted its first win, with Cunningham leading the way, beating the New York Knicks 93-87. Cunningham dropped seven threes in 10 attempts and added seven boards.

Cunningham is the top favorite for the ROY award, +225, and is expected to make the Pistons a playoff contender in the next two or three seasons.

Detroit created the advantage in the first and the third period, once he outscored the rivals by a double-digit margin. The best in New York was Obi Toppin, with 31 points.

In the big derby between the LA Lakers and the LA Clippers, the purple and gold took a slight victory, 86-84, as Justin Robinson set a final score, hitting a free throw with five seconds to go. Brandon Boston Jr. tried to score a three but was inaccurate, and the Lakers won.

Vic Law had 15 points, Robinson 13 for the winners. Meanwhile, Boston Jr. scored 17 for the Clips.

In other matches, the Minnesota Timberwolves rolled over the Milwaukee Bucks, 91-64, the Utah Jazz was more than convincing against the Miami Heat, 84-65, while the New Orleans Pelicans defeated the Cleveland Cavaliers, 87-74. The third pick from this draft, Cavs’ Evan Mobley, had 8 points with 11 boards in that one.

Golden State Warriors were better than the Oklahoma City Thunder, 94-84, and the Sacramento Kings routinely beat the Memphis Grizzlies, 90-75.