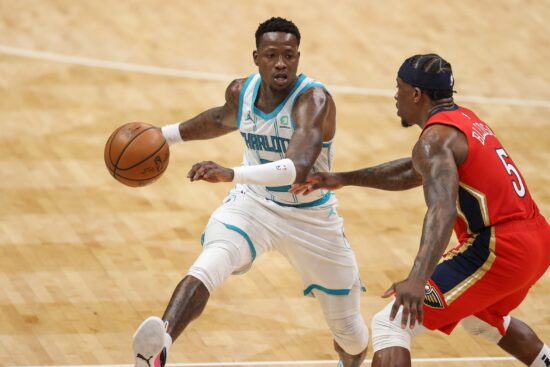 Terry Rozier and the Charlotte Hornets have extended their partnership for four more years. The Hornets have completed one of the biggest tasks for this free agency, keeping their playmaker long-term.

Rozier has been one of the Hornets’ best players and, without a doubt, the most influential one. He scored 20.4 points with 4.2 assists, 4.4 boards, and 45% shooting from the field, becoming one of the best attackers in the point guard position.

The 27-year old came to Charlotte from Boston Celtics in 2019 as a part of a trade-in which Kemba Walker went to Massachusetts. He signed a three-year deal for $56.7 million, immediately becoming the leading player on the team.

Some would say that the Celtics made a massive mistake giving Rozier and the package around him for Walker, who became one of Boston’s biggest busts in the past 20 years. He eventually left for New York Knicks this summer.

Rozier’s leadership and his quality have been key factors why James Borrego’s crew became one of the most exciting for watching in the East and one of the playoff contenders.

Charlotte has been one of the nicest surprises in the first half of the previous year. At one point, the franchise from North Carolina even reached the fourth seed, but various injuries have prevented them from staying in the playoff zone.

Apart from Rozier, who was out for a substantial period, the Rookie of the Year award winner, LaMelo Ball, was also out, as well as the most expensive player in the team, Gordon Hayward, the biggest addition during the 2020 free agency.

All this saw the Hornets falling down in the Eastern Conference standings, eventually ending as the ninth seed, only securing the play-in tournament. Charlotte lost immediately in the opening round against the Indiana Pacers.

According to the latest odds, they are on the verge of the playoff zone in any of the 2021 projections. The odds on them to enter the postseason are at -215, with the Hornets holding that eight spot right now. Ahead of them are the Toronto Raptors, -300, the Celtics, -525, which is the same as the Atlanta Hawks.

Behind Borrego’s team are the Indiana Pacers, -170, the Chicago Bulls, -155, and the New York Knicks, -135. This year’s battle in the East is much more promising than in some other seasons.

With all the players healthy and with a few more additions, we strongly believe that the Hornets will be capable of appearing in the playoffs for the first time since 2016.

LaMelo should be even better than in 2020, which means that Rozier could get more options and freedom in attack, especially because he and the youngster have created solid chemistry in their first campaign together.