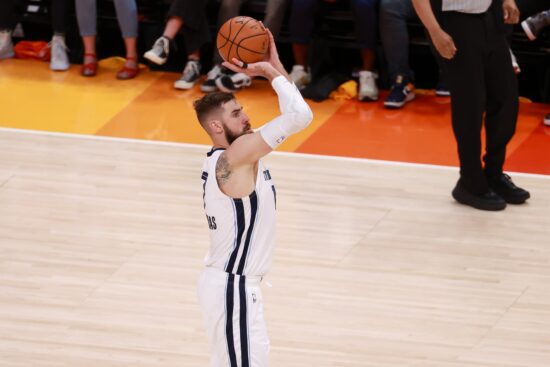 The first big trade of the NBA this summer is between the Memphis Grizzlies and the New Orleans Pelicans, two young teams who are tightening up their rosters.

Valanciunas Sacrificed for No.10 Pick

The deal includes Valanciunas, the No.17 pick, and the No.51 pick from this draft going to the Big Easy, while on the other side, the Pelicans are shipping Eric Bledsoe, Steven Adams, the No.10 pick, the No.40 pick, and the protected 2020 first-round pick to Memphis.

According to the experts and analysts, the Grizzlies decided to accept this deal mostly because of the tenth pick from Thursday’s draft. They are now able to add more depth to their highly talented team or use that selection as an asset in some other blockbusting trade.

Apart from that, they get Bledsoe and Adams two very valuable pieces for their game. The first is an experienced guard who was once an elite defender with a high shooting percentage but slowed down in recent times, scoring just 12.1 points per match in the previous season.

Adams also had a subpar year according to his standards – 7.6 points and 9.8 boards. Yet, it is expected for him to improve numbers in a much more suitable environment for his game, which Memphis is.

These two take a very large share of the Grizzlies’ salary cap, Bledsoe $18.1 million and Adams $17.1 million, but it appears that the team from Tennessee is willing to sacrifice that because Bledsoe has two more years on his contract, and some of the money is not guaranteed.

On the other side, the Pelicans had motives of their own for executing this trade. The first and foremost is the fact that they now have enough money for Lonzo Ball. The young point guard is a restricted free agent, and the Pels now have the resources to match any offer that comes along his way.

Even though his stint in New Orleans didn’t start the way, many expected, Ball took his game to another level in the previous year, becoming very valuable for the team. With 14.8 points, 5.7 assists, and 4.8 rebounds per contest, he became an excellent playmaker and a vital piece of New Orleans’ game, along with Zion Williamson and Brandon Ingram.

The franchise from the Big Easy also wanted to have Valanciunas, who had arguably the best season of his career recently. The big man from Lithuania had the third-highest number of double-doubles in the NBA, behind the MVP Nikola Jokic and Russell Westbrook.

Averaging 17.1 points and 12.5 boards while shooting 59.2% from the field in just 28 minutes on the floor, Valanciunas was one of the best centers in the league.

The Pelicans are one of the worst teams in the league when it comes to defense, and Valanciunas’ toughness will for sure help them solve certain issues on that part of the court.