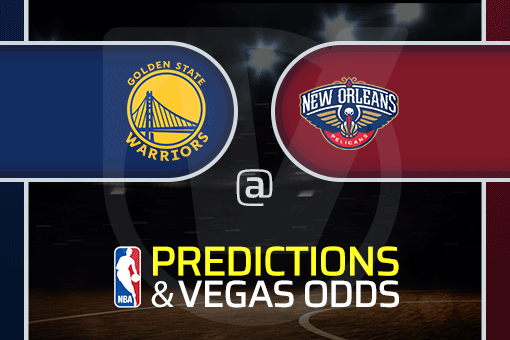 Looking for the latest Warriors vs Pelicans prediction? – Look no further because Vegas Odds has you covered.

The Warriors are playing again after last night’s spectacle, and their next rivals are the New Orleans Pelicans.

The Warriors exploded in Houston last night, beating the hosts, 127-120, with the Splash Brothers ruining the rivals’ basket. Klay had 41 points, shooting 10-for-13 for three, reminding everyone of his old form.

Meanwhile, Steph had 33 points, so it’s no wonder why Dub Nation beat the Rockets. Apart from that, Curry added 15 dimes, several of them to Klay, and he himself hit seven threes. Andrew Wiggins finished the night with 22 points.

The Pelicans are at home for a while and have yet to hit the road. The previous five events were in Louisiana, with them winning three and losing two. After three consecutive triumphs, the Pels were defeated by the Celtic on Friday, 117-109.

Zion was out in that event, and he will probably miss this one as well. Brandon Ingram led the way with 25 points, seven assists, and five threes, while CJ McCollum had 18 points and Herb Jones 17.

For the moment, the over/under line is at 229 points, and we would pick over. The Warriors brought back the groove, especially Klay, who will stay hot, while Steph has arguably the most efficient start of the season in his career. On the other hand, the Pelicans are all about the offense, and that’s also another reason for picking over.