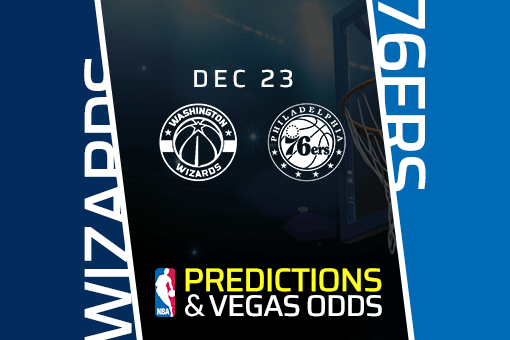 The upcoming Wednesday night game between Washington Wizards and Philadelphia 76ers is almost surely leaning the way of Philadelphia. The 76ers came into the pre-season with two wins against the Boston Celtics and Indianapolis Pacers, two teams that are no minnows.

On the other hand, Washington had two highly-contested games against Detroit Pistons, winning one, but losing the other. It’s in this context that the teams clash at the Wells Fargo Center, Philadelphia, PA at 7pm ET.

There is the added advantage of the 76ers hosting Washington at home which will add to the Wizards’ trouble when trying to keep up the pace. Yet, the Wizards now have Russell Westbrook and he is bound to make a difference.

For their part, the 76ers have Doc Rivers to play around with and the opening game for the teams this season promises to be every bit as exciting as you can hope for.

Last season the Washington Wizards didn’t make much of an impression, but they are about to thanks to the signing up of Russel Westbrook who seems quite determined to help the Wizards reach the playoffs in the conference this year. Last year, Washington finished 9th in the overall standing.

Of course, Westbrook cannot be the sole playmaker in the team, and putting all your eggs in one basket is definitely not a strategy Scott Brooks would want to see for his team. Yet, Westbrook’s presence can be edifying and inspiring.

Besides, Westbrook has Bradley Beal to rely on and the pair can make some difference for Washington. Given the current setup that involves other talented players such as Deni Avdija, Davis Bertans, and Thomas Bryant, Washington are looking at a good start to the season.

Securing Russel Westbrook is a fantastic opportunity for Washington. They have not been able to break into the playoffs for three seasons now, and having Russel give them a much-needed confidence boost is precisely what Washington need.

But can Westbrook really push Washington to the top? It’s a bit of a toss-up really, as the 9-time All-Star player is definitely a strong asset in any squad, but for his talents to shine there will have to be chemistry between the players.

Bradley and Russel will need to find a pace of play that dictates the entire offense of the team, and even better, they will have to teach others how to adapt and deliver on a similar performance.

The 76ers are coming in this season with one clear goal in mind. Top the Eastern Conference and carry on this success right up to the NBA Finals. There has been some internal reorganization, though, to set up Philadelphia for what the team hopes is its future success.

Doc Rivers is stepping up to take over the team and on an executive level, you have Daryl Morey, who is just as keen to see the team make it to the top. The cogwheels of the 76ers machinery are ticking over nicely.

Now, when it comes down to the players, we have plenty of great options here. Seth Curry and Danny Green joining the 76ers is a fantastic way to strengthen the lineup a notch further. With these two on the job, the 76ers will shave off any issues they have had with scoring in the previous season and Dwight Howard is ready to pitch in if Joel Embiid has to leave.

In other words, Morey has thought of pretty much every possible scenario this season, and is willing to spread the mileage between players so as to guarantee that when the 76ers make it in those final stages of the season, they will be able to have a fair shot for the title.

Seth Curry brings a lot of talent and experience to the league, but just make sure not to confuse him for his elder brother, Stephen Curry, who is another NBA ace. Yet, the 76ers have gone with Seth and they are putting a lot of hopes on him in terms of improving the team’s overall shooting potential. To put things in perspective for you, Curry is the sixth best three-point stats of all-time NBA scorers:

The 76ers were criticized for some underperformance when taking shots, and this will now be solved, Morey hopes, with Curry joining onboard. His three-point shooting is one of the best in the NBA, and he is capable to realize points in high-pressure scenarios with defendants closing in.

This is an interesting matchup, as there will be intrigue to see how Westbrook will settle with the Wizards. However, the Sixers are the team with the quality to top the Eastern Conference, and we expect them to get off to the best possible start.