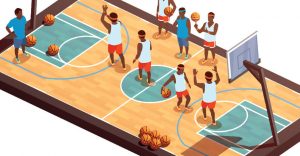 Happy College Basketball season! Things got underway early last week, and now various teams have played multiple games. This promises to be another exciting season, with an extremely talented freshman class across Division I. Read below as we highlight a few key games happening this week.

It’s been a solid two-game start for the Cardinals, scoring 84.0 points per game as a team. KZ Okpala is leading them, with 26 points per game through those first two contests, hitting 15 of 26 shots from the floor. Cormac Ryan has been averaging 15.0 per contest, while Daejon Davis rounds out the guys scoring in double figures with 12.5 per game. The Stanford Cardinals have a lot of potential for greatness in 2018-19, and be sure to keep up with Okpala and his BUCKETS.

One of the best teams in the nation, UNC has five players averaging in double figures, led by returning veteran Luke Maye, averaging 16 points and 8.5 boards per game. Cameron Johnson, who spent three years, before spending last year and this one at UNC, is averaging 19.0 points per game and looking efficient. This team could stand to improve their three-point game a little bit, but lack weaknesses besides that.

The Wolverines have been winning games off their defense early on, only averaging about 60 per game, with Mo Wagner and Duncan Robinson moving on to the pros. Freshman Ignas Brazdeikis has looked good, leading the way with around 15.5 points per game. Charles Matthews is right behind him with 15 per night, but a big issue with this team has been a lack of three-point makes, with nine in two games. Speaking of nine, Jon Teske has that many blocks. Wow.

Looking for another national title, the Wildcats have played well through the first few games. Phil Booth is averaging 20 points per game, with senior Eric Paschall not far behind at 18 per night. Nova has been burying the long ball, with six players having hit multiple so far, 24 makes as a team. They have blocked 17 shots through two games, and both of these sides will be dominating the game in the paint, defensively.

Prediction: Villanova wins, in large part because of the three ball.

At 1-1, the Aggies probably wish they could have one more win. Savion Flagg is struggling with his outside shot on the young season but is averaging 17.5 points and 10.5 boards per game. He’s been sharp, and has been just what his team has needed. They have taken 66 threes through two games, with only 14 makes.

Prediction: Gonzaga gets to 3-0.