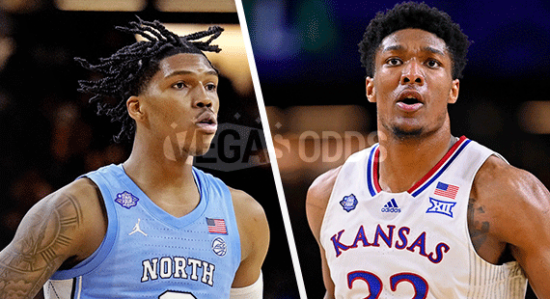 The North Carolina Tar Heels game against Duke in the Final Four on Saturday lived up to the hype, with UNC getting the win in a contest that featured almost 20 lead changes. North Carolina cannot consider that their championship game though, and they have to have a quick emotional resuscitation ahead of Monday night’s battle for the title.

The Kansas Jayhawks have to look good heading into the season finale, especially after dispersing #2 Villanova with relative ease in an 81-65 win in the Final Four. It would be easy to ride the Tar Heels’ momentum, but KU just might be the best team in college basketball and they are anxious to prove it.

For many people, the matchup between #8 North Carolina and #2 Duke felt like a National Championship in a variety of ways. It was Blue Devils coach Mike Krzyzewski’s final game, and the Tar Heels managed to not only spoil their rival head coach’s last home game at Cameron Indoor Stadium (94-81) in the regular-season finale but also sent him into retirement early with the Final Four win.

Now the big question becomes is if UNC can retrain their focus on beating Kansas on Monday night. The Tar Heels definitely have the horses, as Armando Bacot had another huge game with 11 points and 21 rebounds against the Blue Devils. That’s following a 20 point, 22 rebound performance against Saint Peter’s in the Elite 8. The Tar Heels are far from a one-man team though, with Caleb Love blowing up for 28 points against Duke and Brady Manek scoring 19+ in three of the last five.

Monday night’s game will serve as an homage of sorts to legendary coach Roy Williams, who was with Kansas from 1988 to 2003 and then helmed North Carolina from 2003 to 2021. North Carolina coach Hubert Davis has shown he’s not one for sentimental moments though, ruining the party at Krzyzewski’s last home game and also knocking Coach K out of the tournament.

Despite North Carolina’s successful run, it’s hard not to like Kansas in this spot. Aside from running away from 2X National Champion Villanova on Saturday, the Jayhawks’ 76-50 win over Miami in the Elite 8 is highly underrated. The Hurricanes had a 35-29 lead at half, 6 of their previous 7 losses had been by 4 points or less, and had beaten both North Carolina and Duke on the year – yet Kansas still blew them out 47-15 in the second half.

It’s just a hard ask for North Carolina to rebound from the emotion of meeting with rival Duke and ending Krzyzewski’s career to play a very, very, very good Kansas team on Monday night. Bacot was going through some leg issues towards the end of the Blue Devils game and he’s got a huge battle with Kansas’ 6’10”, 250 pound David McCormack who had 25 points in the win over Villanova. The emotional toil catches up to the Tar Heels here in a big way.