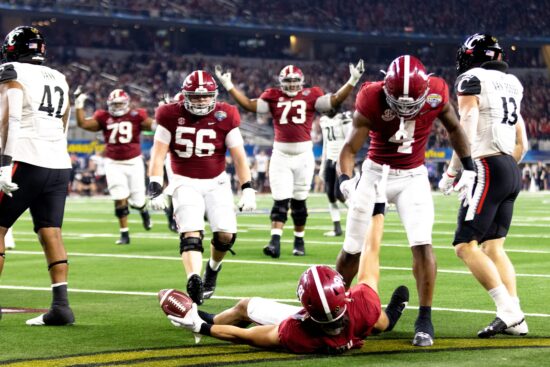 For Alabama, it’s all about stretching that season drive which placed them as the top-ranked team since the early stages of 2021. Now in the pursuit of their second consecutive title, the Crimson Tide will have to narrow on a couple of key strategies to conquer the 2022 National Championship.

Fighting against one of the strongest defenses in the country might prove to be a significant challenge for any squad. That is why protecting their 2021 Heisman Trophy-winning quarterback Bryce Young will be a top priority for the team to remain consistent on the scoreboard.

Still, not all pressure can be placed on one player. That is why running backs such as Brian Robinson Jr. will have to help when needed and not leave Young in too many third-down situations due to a lack of a solid running game.

The Crimson Tide will have to simply believe in themselves aside from putting pressure on Georgia’s offense, currently commanded by QB Stetson Bennett. This might sound overly simplistic and perhaps obvious. Still, Bama is leading confidently, knowing that the key lies in their roster to fulfill what was expected even before the 2021 season began.

Top Strategies for Georgia to Win against Bama

The Bulldogs are ready to face their championship contenders tonight. Still, Georgia has a series of critical items that will play a significant role in what happens at Lucas Oil Stadium.

The first thing for the Bulldogs is to recognize is that they are one of the strongest defenses in the country. Keeping their front seven constantly pushing against Young’s protection might just give them an edge to force Alabama into more third-and-long situations.

Once their defense is up and running, the Bulldogs’ offense must also do its part. Bennett will need to find his pace and keep aiming to bulk up his 2,638-yard passing mark this season for this to happen. With 10.1 yards per pass, placing him as one of the top three quarterbacks in the nation, Georgia needs to trust their field commander.

Finally, Georgia is the favorite to win the championship. Even before their semifinal game win over Michigan, Georgia was never envisioned to have reached the final stage of the season. The Bulldogs need to power through and acknowledge that they have everything they need to surpass Bama tonight.

Georgia unexpectedly has the odds in their favor. Although the Bulldogs are still not favored by the popular vote, their -145 odds to take the championship game tonight are better than Bama’s +120.

Both teams achieved a 13-1 season record. On average, the top-ranked team surpassed Georgia by less than two points per game on offense. Third-ranked Georgia has allowed more than 50-yards less than their Crimson Tide rivals have on defense.

It appears that everything is set for the final game of the NCAA Football season to take place tonight at Lucas Oil Stadium in Indianapolis. No matter who walks away with the title, the anticipation for a top-level matchup couldn’t be higher.